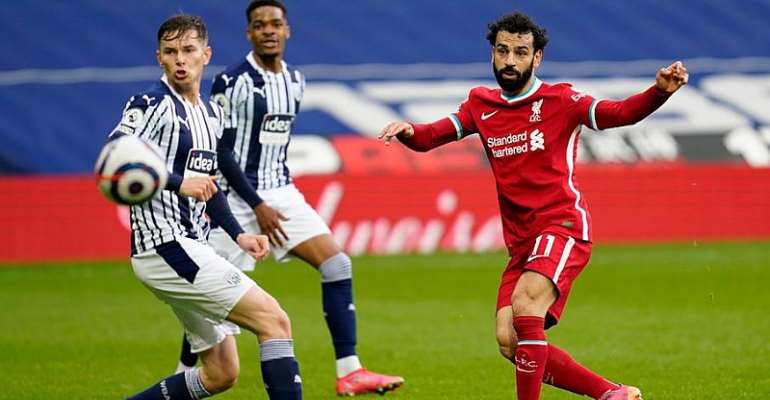 Egypt's Mohamed Salah goes into the final two rounds of the Premier League season as joint top scorer with Harry Kane on 22 goals in the Golden Boot race.

Both scored at the weekend with Salah equalising for Liverpool in their dramatic 2-1 stoppage-time victory at West Bromwich Albion.

Nigerian Simy became only the second African after Samuel Eto'o to score 20 goals in a Serie A season by levelling for already-relegated Crotone in a 1-1 draw with Benevento.

Here is a round-up of performances of Africans in the major European leagues:

The two-time African Footballer of the Year fired in a brilliant finish off the inside of the post to get Liverpool level as the Reds kept their chances of a top-four finish in their own hands.

Benrahma grabbed his first Premier League goal late on in a 1-1 draw at Brighton, but it was too little, too late for the Hammers' hopes of a Champions League place next season. The Algerian curled in from the edge of the box three minutes from time.

Nigerians Ndidi and Iheanacho both started as Leicester won the FA Cup for the first time with a 1-0 win over Chelsea in front of 22 000 fans at Wembley. Ndidi played a starring role in midfield as the Foxes held the Champions League finalists at bay.

Nigerian Simy got his 20th goal this season for already-relegated Crotone, scoring deep in injury time to snatch a 1-1 draw against Benevento. The 29-year-old matched his tally from last season, which had helped the southerners to top-flight promotion. "I've been in Italy for five years, and having the best moment of my career," said Simy.

Ivory Coast midfielder Boga fired in the third goal for Sassuolo in a 3-1 win over Parma, his fourth league goal this season for the eighth-placed side.

Angolan striker Nzola scored in each half, including from the penalty spot, and missed the chance for a third in a 4-1 win for Spezia over Torino, which guaranteed the winners another season in Serie A.

The Malian midfielder came on at halftime with hosts Leipzig 2-0 down to Wolfsburg. After Justin Kluivert pulled a goal back, Haidara won a penalty which Leipzig converted to equalise 12 minutes from time. The 2-2 draw clinched second place for Leipzig behind Bayern Munich.

Moroccan attacking midfielder Harit won an early penalty which Schalke converted at the second attempt in a stunning 4-3 home win over Eintracht Frankfurt. After the visitors equalised, Senegal centre-back Sane headed the ball into his net to put Eintracht 2-1 up. However, already relegated Schalke roared back to triumph and deprive Eintracht of Champions League football next season.

DR Congo attacker Wissa fired home the opening penalty in a 2-1 win over Metz which ensured that his team will not be automatically relegated from Ligue 1 this season and giving them a chance to stay in the top flight after being promoted last campaign. The 24-year-old's team are one point above the relegation playoff position with one match remaining thanks in part to his 10th league goal of the campaign.

Algeria international Slimani bagged just his third goal of the Ligue 1 season when he scored the fifth in Lyon's 5-2 mauling of Nimes two minutes from time. The win leaves Lyon one point off the Champions League positions heading into the final round of fixtures next weekend.