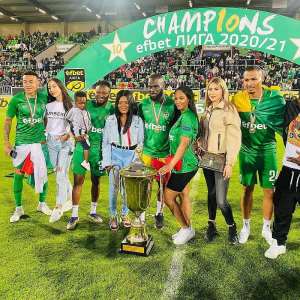 Both players were in action for their club in a matchday 28 encounter against Lokomotiv Plovdiv.

Ludogorets lost 2-1 at the end of the 90 minutes but had no effect since they have won the league already.

However, Elvis Manu, who is Dutch-born of Ghanaian descent could not play the entire duration as a result of a red card he received in the 68th minute.

Despite the defeat, Ludogorets still are champions of the Bulgarian Parva Liga with two matches to spare.

As a result, the team lifting the title for the tenth time in a row were handed their trophy after the Lokomotiv Plovdiv game.

In the presence of their partners and kids, Bernard Tekpetey and Elvis Manu joined their teammates and team officials to celebrate the league title triumph.

Check out pictures of the celebrations below: