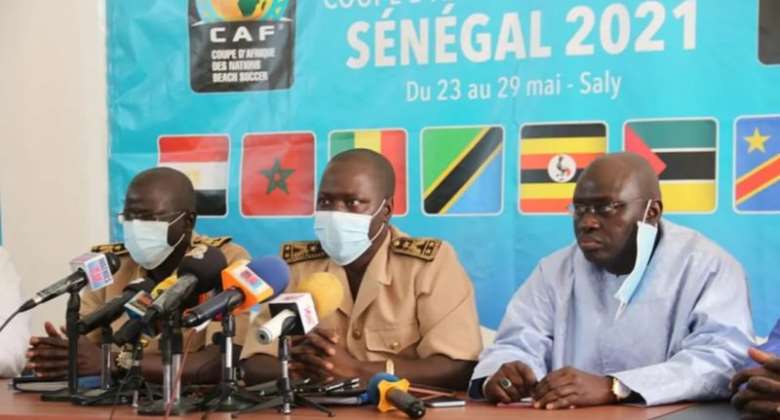 The Beach Soccer Africa Cup of Nations, Senegal 2021 kicked off on Friday afternoon following the launch of the competition in Thiès, Senegal.

On Friday, Senegal government and football officials launched the festivities leading up to 23 May – the opening day of the competition.

At a press conference of the Local Organising Committee (LOC) in Thiès, Governor Mamadou Moustapha Ndao told the media that preparations are on track for the Beach Soccer Africa Cup of Nations.

The governor had earlier called a meeting with key stakeholders involved in the organisation to ensure synergy in the planning.

“We are working very hard to ensure that we are prepared for this. This includes the meeting we held recently which discussed a lot of things relating to security, hygiene, the layout of the site where the competition is to take place and also to the reception and accommodation of all the delegations.”

“There was a firm commitment to work hard and ensure that teams can compete in good conditions.”

Apart from Senegal, which enjoys the status of host country of the tournament and titleholder, seven other teams will take part in the Beach Soccer AFCON notably Egypt, Morocco, Tanzania, Seychelles, DR Congo, Uganda and Mozambique.

The Vice-President of the Local Organizing Committee Oumar Gueye Ndiaye gave a briefing on the technical state of readiness including the construction of the Beach Soccer stadium and the requirements of CAF.

Akufo-Addo doesn't have to advertise his reshuffle — Kyei-Me...
38 minutes ago

Stop threatening ECG Staff, we are losing out livelihood — N...
38 minutes ago