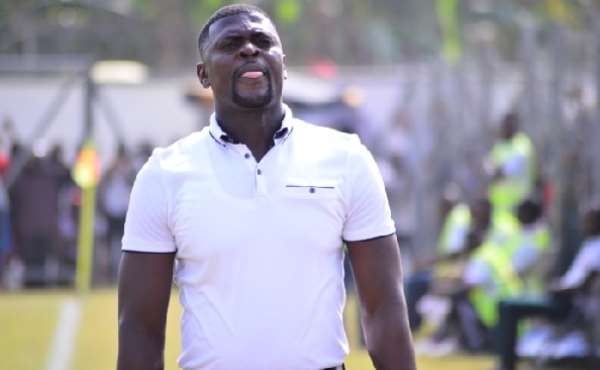 The head coach for Hearts of Oak, Samuel Boadu has described as unfortunate the chances his players missed during the 2-0 defeat to Dreams FC in the Ghana Premier League last Sunday.

The gaffer and his Phobians traveled to Dawu over the past weekend where they played as a guest to their matchday 22 opponent at the Theatre of Dreams.

At the end of a tough contest, Hearts of Oak lost by two goals to nothing courtesy of second-half goals that came after defender Nuru Sulley had been sent off after receiving a red card.

Speaking in a post-match interview, coach Samuel Boadu remarked that playing with 10-men in the second half affected his team.

“We were playing but quite unfortunately we got red card during the second half and it affected our play so the transition and everything changed,” the former Hearts of Oak coach said.

Coach Samuel Boadu continued, “Yeah, but goal conceding the last goal was very bad but I’m not disappointed because the players did well. They played to satisfactory but it unfortunate we couldn’t convert the little chances we created.”

The defeat to Dreams FC has pushed Hearts of Oak out of the top four of the Ghana Premier League table.

The team is now fifth on the league table with 34 points.