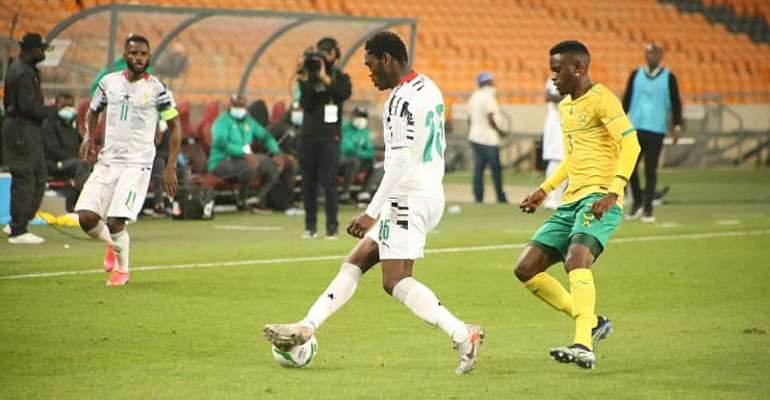 Emmanuel Gyasi against South Africa at the FNB Stadium

Spezia Calcio midfielder, Emmanuel Gyasi has named ex-Ghana captain, Stephen Appiah and former striker, Asamoah Gyan as the players he looked up to whiles growing up.

The 27-year-old made his international debut on 25 March as the Blacks Stars drew 1-1 with South Africa in an Africa Cup of Nations [Afcon] qualifier at the FNB Stadium in Johannesburg.

According to him, the pair always influenced him and always looked up to them.

"In the past, I had two idols in our national team: Stephen Appiah and Asamoah Gyan,” he told BBC Africa.

“They were great, I used to love them and watch all of their games,” he added.

Stephen Appiah and Asamoah Gyan are legends of the Ghana senior national team.

The pair played a key role in Ghana’s maiden qualification in the 2006 World Cup in Germany where the Black Stars played in the Round of the 16 for the first time.

Appiah and Gyan again propelled the country to qualify for the 2010 World Cup in South Africa where the Black Stars improved their performance and played in the quarterfinals of the Mundial.