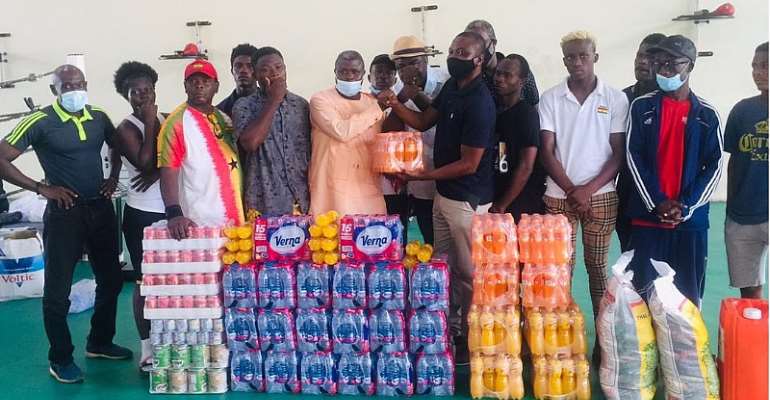 Bukom Boxing Ltd and Rocabella Gives, a charity organization based in the USA on Monday presented some provisions to the national boxing team, the Black Bombers who are preparing for the Olympic Games in Tokyo.

Making the presentation, Mr Raymond Tibson CEO of Bukom Boxing said they heard and saw the need to support the team so that they make an impact at the 2020 Olympic Games which begins on July 28, 2021, to August 8, 2021.

He said boxing is the sport that has proven to be the best in terms of achievements at the Olympic Games and believes the current team is capable of winning medals in Tokyo, Japan come July.

He sent a goodwill message from Mr Mike Akoto the Executive Director and leader of Bukom Boxing who is based in the United States and urged other companies to support the Black Bombers.

Nana Adjenim Boateng Sarkodie of Rocabella Gives.org said they are out to support deprived communities and unearth talents in sports, especially boxing.

He revealed that Rocabella will soon make available boxing equipment like boots, gloves, pants and singlets to juvenile and amateur boxers in Ghana.

He thanked his partner Cheryl Lee for the support and inspiration to contribute to Ghana Sports.

Mr George Lamptey, President of the Ghana Boxing Federation (GBF) received the items and thanked the two organisations. He noted that the gesture is a motivation and assured the nation that the Bombers will not let the nation down.

Skipper of the Black Bombers, Cp. Sulemanu Tetteh also thanked the donors and promised to come back from Japan with laurels.

Present at the presentation were Mr John Buxton, Operations Director of Bukom Boxing Ltd who are into media and management and matchmaker Rasheed Williams.

Tolon: NDC slams Bawumia for allowing hospital to rot after ...
50 minutes ago