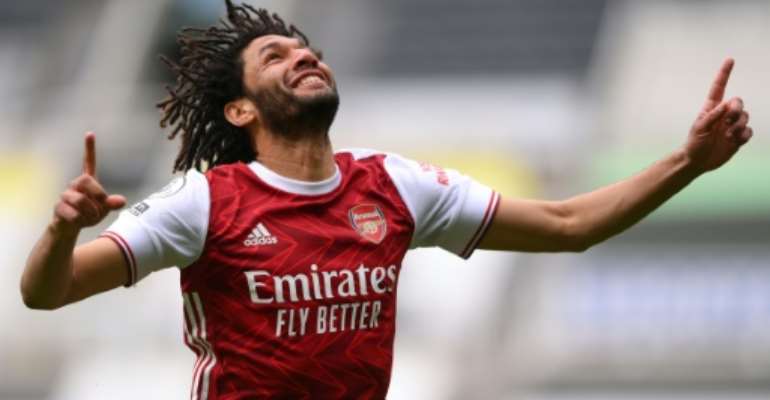 Mohamed Elneny celebrates after putting Arsenal ahead in a 2-0 victory at Newcastle. By STU FORSTER (POOL/AFP)

Egyptian Mohamed Elneny broke a 64-match English Premier League goal drought since joining Arsenal five years ago by scoring in a 2-0 win over Newcastle at the weekend.

The 28-year-old midfielder needed only six minutes at St James Park to end his barren run and Gabon captain Pierre-Emerick Aubameyang doubled the lead midway through the second half.

Victory snapped a three-game winless streak by Arsenal ahead of a Europa League semi-final second leg against Villarreal at the Emirates on Thursday.

Here, AFP Sport rounds up the performances of Africans in the major European leagues:

Elneny, who joined the Gunners from Swiss club Basel in 2016, said he had been thinking a lot recently about scoring in the Premier League. "I had scored in the Champions League and Europa League, but not in the Premier League," he told the club website. When Aubameyang missed his kick from Hector Bellerin's cross, the ball rolled to Elneny on the edge of the area and he drilled a low strike past Martin Dubravka.

He scored for the first time in seven games as his spectacular strike wrapped up a comfortable win. The Arsenal captain had recently been hospitalised by malaria picked up on international duty with Gabon in March. That was the latest in a series of setbacks for Aubameyang this season, but he gave a glimpse of his class in the 66th minute. Gabriel Martinelli curled over a cross from the left for his strike partner to leap off his feet for an agile volley that crashed past Dubravka from close range. It was the 31-year-old's 15th goal this season.

Nigeria forward Osimhen scored for the third consecutive game, connecting with a hall over the top from Lorenzo Insigne, after 13 minutes in Naples. It was his fifth goal in six games and eighth this season. Cagliari scored with the last kick of the game to snatch a 1-1 draw but fifth-place Napoli remain in the running for the Champions League.

Moroccan defender Hakimi scored the second goal deep into injury time in a 2-0 win for Inter Milan at Crotone as his team claimed their first Serie A title since 2010, and 19th in total. Nicolo Barella teed up the 22-year-old former Real Madrid player to finish off for his seventh goal in an impressive first season in Serie A.

Atalanta goalkeeper Pierluigi Gollini was sent off for a reckless challenge on Ivorian forward Boga after 22 minutes. Another foul, on fellow Ivorian midfielder Hamed Traore, saw Sassuolo awarded a penalty seven minutes after the break, which they converted in a 1-1 draw.

The Malian midfielder was replaced at half-time by Christopher Nkunku on the right wing before Emil Forsberg's 121st-minute volley eventually sealed Leipzig's 2-1 win at Werder Bremen as a tense German Cup semi-final went to extra time. Leipzig face Borussia Dortmund on May 13 in the final.