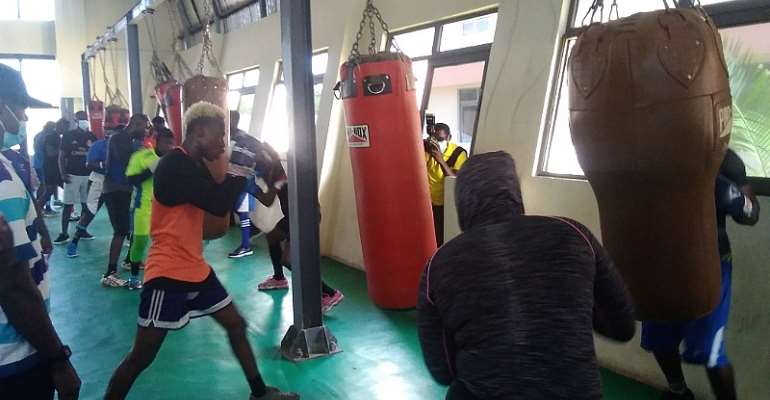 The Trust Sports Emporium Ltd (TSEL) have put their ultra-modern gym and Ga Mashie Sports Hall at the disposal of the Black Bombers from Monday, April, 26 till the end of June 2021.

The Bombers had their first training session at the Sports Hall on Monday and they expressed satisfaction and joy as their preparations stepped up.

Nii Okai Nunoo, Corporate and Marketing Consultant at the Emporium said he is very optimistic that the Black Bombers will shine in Tokyo and urged other corporate bodies to support them.

He recalled that the TSEL gave them a package before the Olympic Qualifiers at Senegal where the team did well to sail through to qualify.

He commended skipper Sulemanu Tetteh, Samuel Takyi and Shakur Samed for there fortitude and enthusiasm in training to enter the medal zone.

Meanwhile, Golden Beach (Royal Dede) Resort at Korle Gonno has also made available accommodation and breakfast for the coaches and boxers who have qualified.

Mr George Lamptey, President of the Ghana Boxing Federation thanked the TSEL and promised that the Black Bombers will certainly come home with a positive story from Japan

Mr Mohammed Shaban, Director of Operations at the Ghana Olympic Committee (GOC) was present at the workout and tour of the hotel. He thanked the two companies for their contribution and wished that others will support the national boxing team.

Tolon: NDC slams Bawumia for allowing hospital to rot after ...
28 minutes ago

Ban on noisemaking during Homowo festival to completely end ...
38 minutes ago