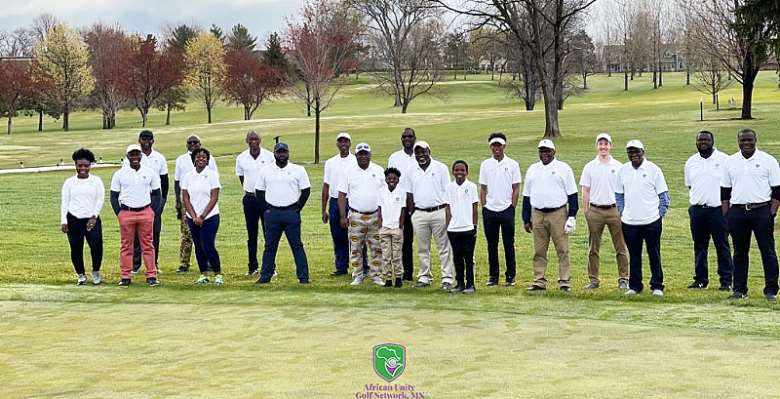 The African Unity Golf Network (AUGN), MN USA on Saturday, April 24 concluded its President's Tee Off; the first official golf outing for the group at the Greenhaven Golf Course, Anoka, Minnesota. The day turned out great success despite the cold weather conditions in the early hours.

The African Unity Golf Network (AUGN), MN USA was established in June 2020 to stimulate interest in golf within the African Community in the State of Minnesota by bringing together golfers of African descents as well as promote and encourage participation in the game of golf among females and youth in the African community.

During the President's Tee Off, members of the golf network and their guests started arriving at the plush clubhouse at 8:30am CST and were treated to hot beverages and pastries.

The members later took turns to take photos and later converged for their group pictures at the fringe of the practice green.

At 10am, the President of the organization Dr. Sam Asante-Buabeng walked to the first hole with his group members, to officially tee off. In his usual calm and relished posture, he drove admirably onto the fairway covering over half of the 422 yards hole.

Realizing the outcome of his first drive and the applause from the sideline, it ultimately set the tone for what will become the official 2021 golf outing for the AUGN in Minnesota.

Some Junior golfers tagged along with their parents to gain early exposure to the game.

Tee after tee; with a medley of straight and wayward shots, the golfers walked the fairways, battled the greens all in a bid to enjoy the game that's quietly gaining some attention within the African community in Minnesota.

The Captain and the PRO of the organization; Mr. Collins Oppong expressed satisfaction about the event. He reiterated the readiness of the members of the club to reach out to the community to join the growing family of the African Unity Golf Network.

On his part, Dr. Emmanuel Letsu-Dake; Organizing Secretary of the organization hinted of an upcoming Invitational Tournament that is coming off on July 24 which is positioned to be the biggest outdoor event of the organization since its inception in June 2020.

I never said northerners are only fit to be running mates — ...
38 minutes ago