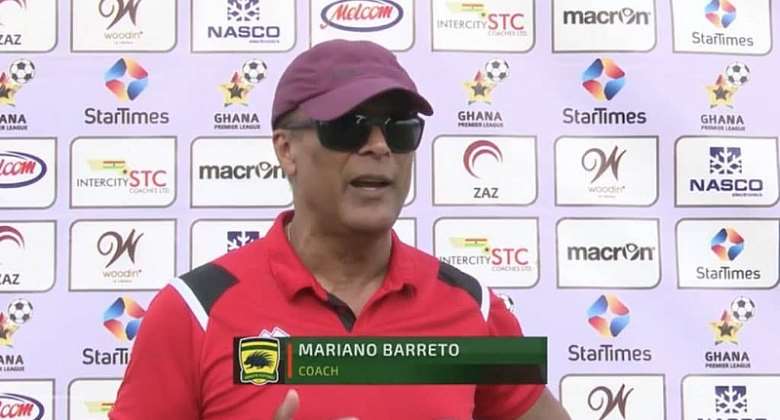 Asante Kotoko coach Mariano Barreto has called on referees in the Ghana Premier League to protect the skilful players from reckless and dangerous challenges.

The Portuguese trainer who joined the Porcupine Warriors on a one and half year deal comments come following their 2-0 win over Berekum Chelsea.

However, two of his players suffered injuries in the course of the game.

Goals from Andy Kumi Francis and Godfred Asiamah were enough for Kotoko to pick the maximum three points at the Obuasi Len Stadium as they go top of the league table with 34 points.

Speaking after the game, the former Black Stars coach noted Ghana has a lot of skilful players and he is of the view the referees' duty is not only to whistle but to protect those skilful players.

"I have two players injured. The work of the referee is not only to whistle, he also has to protect the players. Now I have a national player injured, I don’t know how long he’ll be out.

"Ghana have skilful players and the referee has to protect these players. I like warriors, my team are full of warriors but we don’t kick our opponents. You didn’t see any of the opponent’s player come off injured today.

"We made two big mistakes and they almost scored. It’s not that they created these chances, we have them the ball. But after that, we started playing our way; not shooting long balls. I know people like long balls but it isn’t Kotoko way.

"Berekum Chelsea were aggressive and created a lot of problems; we were not able to play as we planned in the first half," he said.

Asante Kotoko will be hosted by Accra Great Olympics in the matchday 20 games at the Accra Sports Stadium this weekend.