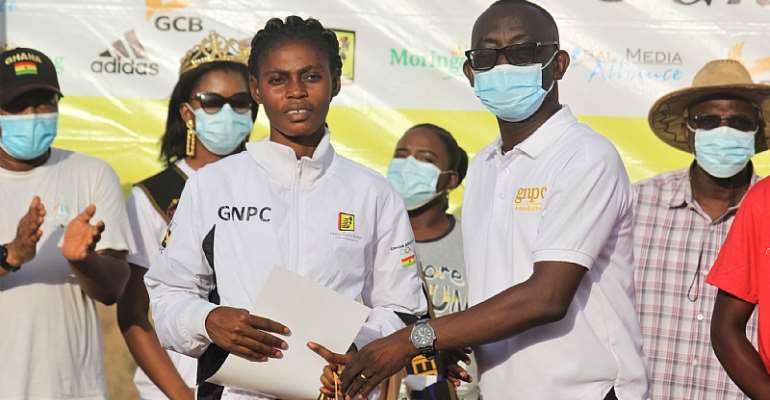 The Accra Open Meet of the 2021 GNPC Ghana’s Fastest Human competition attracted a lot of special guests and dignitaries and all the athletes put up great performances with rising stars Kate Agyeman of UDS and Edwin Gadayi from Kumasi picking up the top first positions in the seniors' races.

Both members of the GNPC Speedsters Club really had a stiff challenge from other finalists but came out victorious. While Kate Agyeman did 12secs in fighting neck to neck with hot favourite Grace Obour (12.16secs) and Janet Mensah (12.34secs) who placed third in the females' hot race, Gadayi had to use all his speed and strength to run 10.56secs to beat contenders Sarfo Ansah (10. 60secs) and Solomon Hammond of the University of Ghana (10.86secs ).

16-year-old Benedict Kwartemaa aka ‘Jetter’ of Okess SHS who won the U18 Girls was also a delight to watch as she blasted past her rivals in 12. 26secs. Deborah Acheampong did 12.51secs to place second and Felicia Awuni was timed 12.74secs.

Disables athletes, Raphael Botsyo Nkegbe and Atsu Maclean who are preparing for the Tokyo 2020 Paralympic Game also thrilled guests with the Wheelchair Race.

All the winners were presented with certificates and prizes.

The occasion was used to honour three former Ghanaian Athletics Champions; Mike Ahey, Okoe Addy and Ohene Karikari, the first Ghanaian to win an international race outside Ghana. They received gifts from Adidas and GNPC.

Mr Reks Brobbey, the brain behind Ghana’s Fastest Concept said Ghana once ruled the world in sprints, but now attention and funds are on football.

He appealed to sports authorities to bring back the love for Athletics.

Collaborate with NIA to end compilation of new voters’ regis...
41 minutes ago