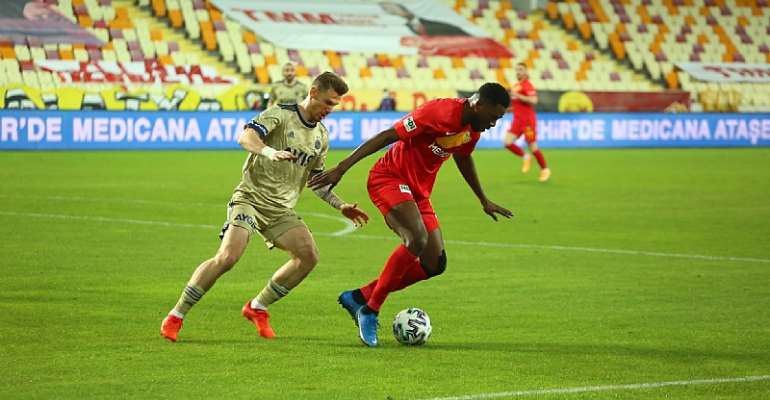 Benjamin Tetteh [on the ball] in action against Fenerbahce on Thursday. Photo Credit/Yeni Malatyaspor

The exciting forward today, started alongside compatriot Afriyie Acquah in the first eleven of the home team when they hosted the matchday opponent at the Malatya Stadyumu.

Although a slow start to the match will see Yeni Malatyaspor trail after 17 minutes courtesy of a strike from Enner Valencia that shot Fenerbahce into the lead, the hosts fought back to earn a point.

In the midst of that fight was Ghana’s Benjamin Tetteh who led the lines of his team to ensure they posed the needed attacking threat to the visiting team.

Massively involved in a buildup in the 35th minute, Mustafa Eskihellac equalized after an assist from Moryke Fofana to restore parity to the game.

In a match that ended 1-1 at the end of the 90 minutes, Benjamin Tetteh lasted the entire duration and finished with a high rating of 7.3 according to statistics provided by SofaScore.

This season, Benjamin Tetteh has made 24 appearances for Yeni Malatyaspor in the Turkish Super Lig and has four goals and five assists to his name.

He has been a star for the side and could land a permanent deal in the summer.