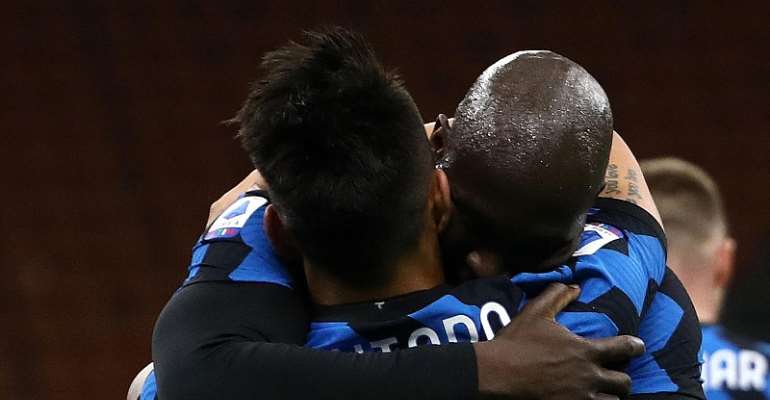 Lautaro Martinez of Internazionale celebrates with team mate Romelu Lukaku after scoring their side's second goal during the Serie A match between FC Internazionale and US Sassuolo at Stadio Giuseppe Meazza on April 07, 2021 in Milan, Italy. Image credit: Getty Images

Romelu Lukaku hit his 21st league goal of the season as Inter tightened their grip at the top of Serie A with a 2-1 victory over Sassuolo.

The Belgian, who has now found the net in 11 of Inter's 14 home games in the league this season, broke the deadlock in the 10th-minute with a clever headed finish from Ashley Young's dinked cross.

Sassuolo may have had much more possession but Samir Handanovic was rarely tested as the visitors lacked ideas and the creativity needed to break down Inter's defence.

Lautaro Martinez doubled Inter's advantage in the 67th-minute, but not without controversy. Stefan De Vrij was alleged to have committed a foul inside the penalty area, but Sassuolo's strong appeals for a spot-kick were ignored and Inter rubbed salt into the wound by scoring with a rapid counter-attack, Lukaku feeding Martinez who finished with aplomb.

Hamed Junior Traore scored with five minutes remaining to set up a tense finish but Inter held on to move 11 points clear of second-placed Milan with just nine games remaining.