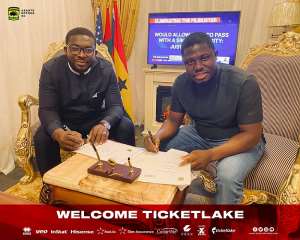 Ghana Premier League giants, Asante Kotoko have announced that they have sealed a sponsorship deal with online ticket firm, Ticketlake.

The Kumasi-based club according to its Chief Executive Officer (CEO) Nana Yaw Amponsah is in talks to bring onboard new sponsors.

Today, the club in an official press release has confirmed that a deal has been reached with Ticketlake to make the firm their official Ticketing partner.

“We are delighted to announce a partnership/Sponsorship with online ticketing giant Ticketlake for the next three seasons, beginning with 2020/21.

Ticketlake joins, Hisense, Veo, Instat, Star Life, Adonko Next Level Energy Drink, errea, and a few others as the sponsors secured for the club since Nana Yaw Amponsah joined as the CEO.

Find below a press release from the Ghanaian top-flight club confirming the deal.