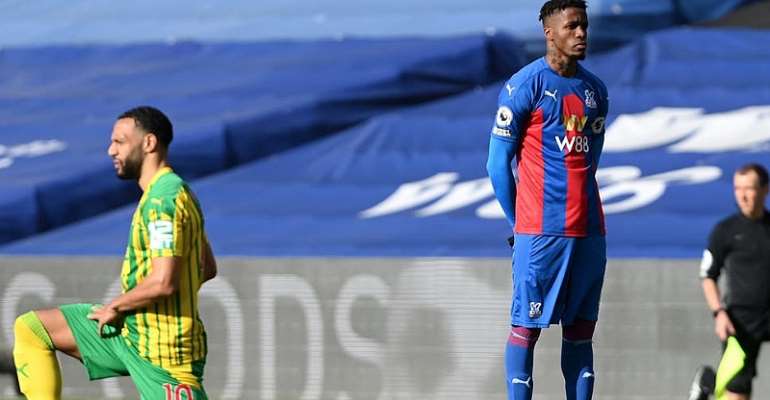 Crystal Palace forward Wilfried Zaha has become the first Premier League player not to take the knee. The Ivory Coast international elected to stand before his side’s game against West Brom on Saturday afternoon.

Last month, the Ivory Coast international described having to perform the gesture as ‘degrading.’ Zaha in the past has spoken of the racist abuse he has been sent on social media.

Zaha had made comments about not wanting to take part in the routine pre-match activity - brought in by the Premier League in response to the Black Lives Matter movement after the coronavirus break - unless he thought it would bring change.

Before the game he released a statement, saying: "My decision to stand at kick-off has been public knowledge for a couple of weeks now.

"There is no right or wrong decision, but for me personally I feel kneeling has just become a part of the pre-match routine and at the moment it doesn’t matter whether we kneel or stand, some of us still continue to receive abuse.

"I also fully respect my team-mates and players at other clubs who continue to take the knee.

"As a society, I feel we should be encouraging better education in schools, and social media companies should be taking stronger action against people who abuse others online - not just footballers.”

In an appearance on the Zaha explained his reasoning.

"The whole kneeling down - why must I kneel down for you to show that we matter?" Zaha said.

"Why must I even wear Black Lives Matter on the back of my top to show you that we matter? This is all degrading stuff.

"When people constantly want to get me to do Black Lives Matter talks and racial talks and I'm like, I'm not doing it just so you can put 'Zaha spoke for us'. Like a tick box, basically.

"I'm not doing any more, because unless things change, I'm not coming to chat to you just for the sake of it, like all the interviews I've done.

"All these platforms - you see what's happening, you see people making fake accounts to abuse black people constantly, but you don't change it.

"So don't tell me to come and chat about stuff that's not going to change. Change it.

"All that stuff that you lot are doing, all these charades mean nothing."