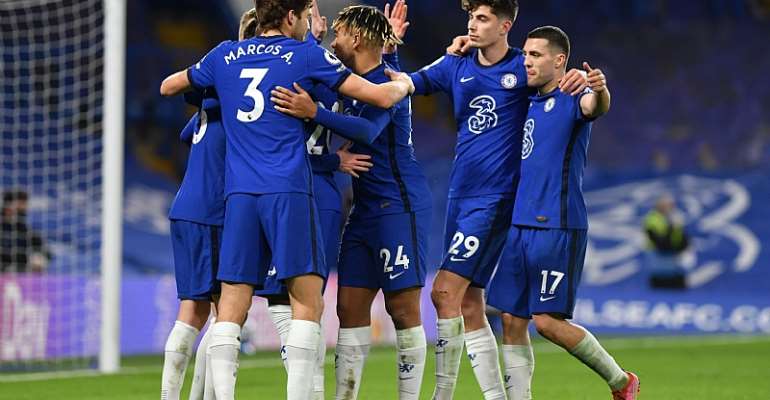 Chelsea stretched their unbeaten run to 11 games in all competitions under Thomas Tuchel as they eased to a 2-0 victory over top-four rivals Everton in the Premier League on Monday.

Record signing Kai Havertz, making his first start since the end of January, saw his strike deflected home by Everton’s Ben Godfrey in the 31st minute to give the home side the lead.

Havertz was again then pivotal in Chelsea’s second as he drew the foul from Jordan Pickford in the penalty area to win a spot-kick, which Jorginho stepped up to slot home in the 65th minute.

Everton never really threatened to get back into it as fourth-placed Chelsea earned a fifth straight clean sheet at home since Tuchel took over, moving four points clear of the Toffees in fifth.

Everton looked comfortable early on as they defended in numbers to frustrate Chelsea, but one surprise move from Marcos Alonso opened the visitors up, with the Spaniard squaring for Havertz, who thought he had scored his first league goal since October, only for it to be given to Godfrey.

Chelsea continued to look supremely comfortable at the back, with Richarlison wasting Everton's best chance of the first half.

After the break, Havertz was again frustrated as he fired home after collecting a cross, but he was adjudged to have handled as he controlled. VAR agreed with on the on-field official David Coote.

The Blues did not have to wait long for another though, as Jorginho made it seven penalties for the season, with his unusual run-up making a reappearance. The rest of the match was a cruise as Chelsea continue their march under the new boss.

Galamsey fight: Back off and allow law enforcement bodies ta...
2 minutes ago

Akuapem Poloo conviction should serve as a deterrent to nude...
1 hour ago