Ghana international Alfred Duncan put in a good shift in the midfield of Cagliari Calcio to help the team earn a 2-2 draw against Sampdoria on Sunday.

The midfielder and his teammates visited the Stadio Luigi Ferraris over the weekend to take on the matchday 26 opponent of the Italian Serie A looking to record a win to boost their chances of survival at the end of the season.

Playing in the midfield of the visitors, Alfred Duncan worked his socks off throughout the 90 minutes he spent on the pitch.

Although he was dribbled past three times, the 27-year-old won five duels and made two important clearances to help Cagliari earn a point at the end of the fierce contest.

For his efforts, the midfielder earned a decent rating of 6.7 from globally trusted statistics providers SofaScore. 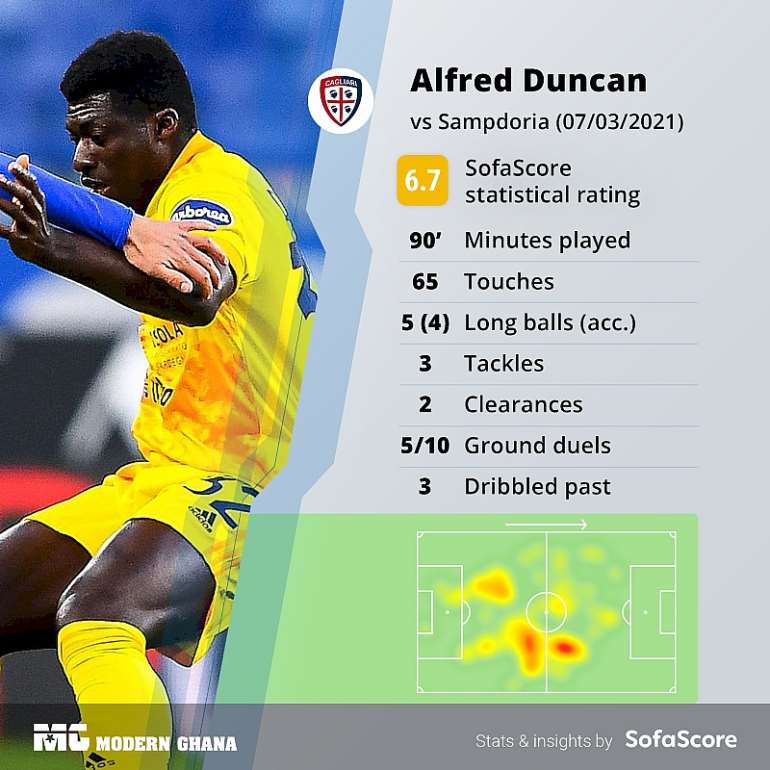 On the matchday, Joao Pedro scored in the 11th minute to shoot Cagliari into the lead after he was assisted by Charalambos Lykogiannis.

Goals from Bartosz Bereszynski and Manolo Gabbiadini in the 78th and 80th minute respectively turned things around to give Sampdoria the advantage before a late equalizer from Radja Nainggolan forced the encounter to end in a stalemate.