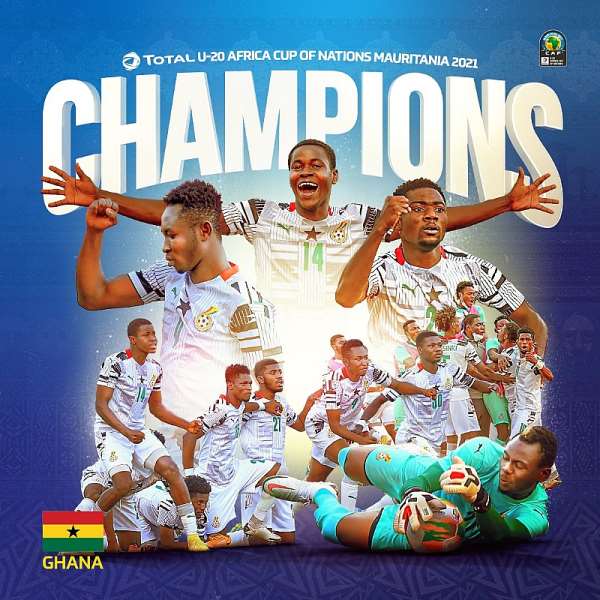 The Black Satellites of Ghana have lifted their fourth Total CAF U-20 Africa Cup of Nations (AFCON) title after beating the Hippos of Uganda in the final of the 2021 edition of the tournament.

Despite finishing third from their group, the West African side steadily progressed into the final with exciting performances in the knockout phase.

Locking horns with their counterpart from Uganda in the final of the tournament staged in Mauritania today, Ghana has gotten the job done with yet another outstanding performance.

In the match played at the Stade Olympique Nouakchott, captain Daniel Afriyie Barnieh scored with an assist from Abdul Issahaku after 20 minutes of play to give Ghana the lead.

Maintaining control and enjoying the lion’s share of possession throughout the game, the Black Satellites sealed the win in the second half courtesy of a second goal from Daniel Afriyie Barnieh.

With the deserved 2-0 win, the Ghana U-20 team has been crowned champions of the 2021 Total CAF U-20 AFCON tournament, increasing the number of trophies won at this level to four for the West African giants.

Galamsey fight: Back off and allow law enforcement bodies ta...
3 minutes ago

Akuapem Poloo conviction should serve as a deterrent to nude...
1 hour ago