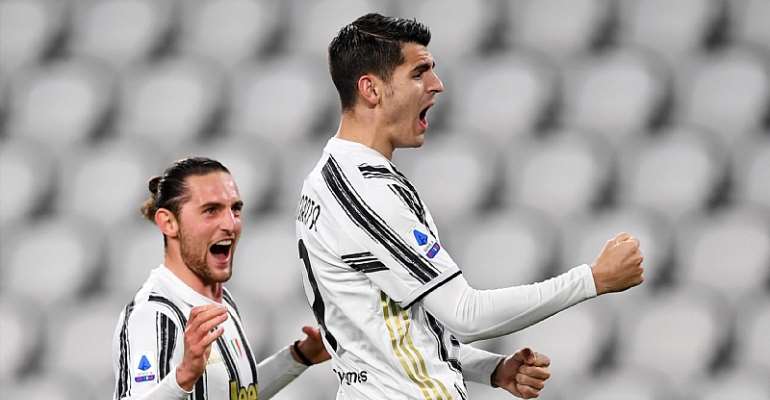 With Cristiano Ronaldo named on the bench, Alvaro Morata stepped up to the mark to score twice and help keep Juventus' slim title hopes alive after a battling victory over Lazio at Allianz Stadium.

Ronaldo was rested ahead of the crucial Champions League tie with Porto in midweek and Juventus were also missing the injured Matthijs de Ligt and Giorgio Chiellini in defence.

A depleted Juventus had it all to do as Lazio came flying out of the traps and took the lead in the 14th-minute through Joaquin Correa after an impressive run through the heart of the makeshift defence.

The hosts had a strong case for a penalty ignored when the ball struck the hand of Wesley Hoedt, but Juventus were also fortunate not to have Alex Sandro sent off after he caught Correa with an elbow.

The Old Lady finally grew into the contest as Adrien Rabiot fired Juventus level with a venomous shot which beat Pepe Reina at his near post, as an action-packed first-half ended 1-1.

The second period was played with the same intensity and Juventus had the crossbar to thank for denying Sergej Milinkovic-Savic goal-bound header.

But two goals from the hosts in the space of three minutes completely changed the complexion of the game.

Morata finished emphatically after latching onto Federico Chiesa's beautifully-weighted pass before the Spaniard bagged his brace from the penalty spot after Aaron Ramsey was fouled by Milinkovic-Savic.

Ronaldo emerged for a cameo but couldn't add to the score, as Juventus claimed the victory that closes the gap on Inter to seven points. Lazio remain seventh.