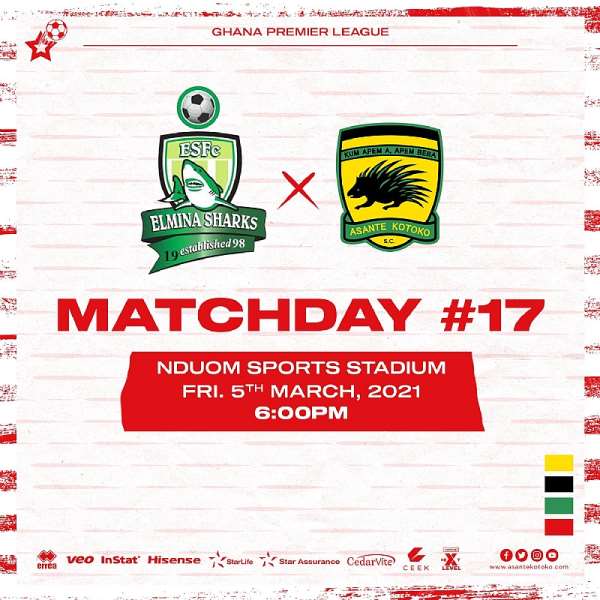 Elmina Sharks will host Asante Kotoko in the Ghana Premier League later this evening to battle for points to improve their respective positions on the league table.

Winless in their last five matches and three successive defeats prior to today’s encounter, the home team cannot afford to suffer defeat again as they risk dropping into the relegation zone.

Having lost the services of head coach Yaw Acheampong, ex-Black Stars attacker now coach, Nii Odartey Lamptey has been brought on board to take charge of the team in the interim.

The new gaffer has little top-flight league experience but is being backed to turn around the bad run for the club.

For Asante Kotoko, the team squandered a penalty kick in their last outing against bitterest rivals Hearts of Oak when they had to settle for a draw at the end of a pulsating encounter.

In a good position to win the league, the club travels to Elmina today keen on adding to the woes of the matchday 17 opponent of the Ghana Premier League.

The match has been set up nicely and is being tipped to produce end to end action.

Player to watch:
Kwame Opoku – Lively and a threat in all the matches he has played, the Asante Kotoko striker will be the man to watch later today. He has already scored 6 goals this season and could well add to his tally to help the Porcupine Warriors cruise to victory.