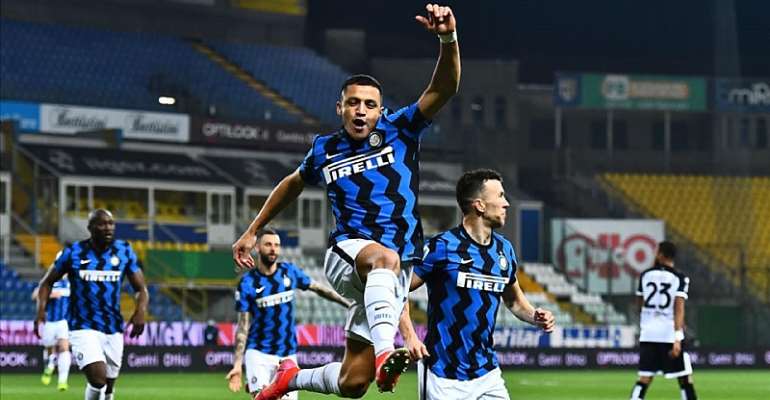 Alexis Sanchez of FC Internazionale celebrates after scoring his team's first goal during the Serie A match between Parma Calcio and FC Internazionale at Stadio Ennio Tardini on March 04, 2021 in Parma, Image credit: Getty Images

Inter Milan move six points clear at the top of Serie A with a hard-fought 2-1 win over strugglers Parma.

Alexis Sanchez scored twice to give Inter a considerable advantage in the title race as the Milan club bolstered their hopes of winning Serie A for the first time since 2010.

Parma’s wait for their first win since November 30 continues as Hernani's volley late on proved to be only a consolation.

Parma began brightly after the bizarre kick-off fireworks. The hosts saw a strong penalty appeal turned down when Dennis Man, on his first start for the Serie A strugglers, went down in the box under a challenge from Nicolo Barella. The Parma striker attempted a shot while the Inter man tried to make a last-ditch clearance. Ultimately, VAR decided to allow play to continue.

In a game Inter were expected to dominate from the first second, it was their goalkeeper Samir Handanovic who was called into action in the 15th minute, making a smart reflex save to repel a free header from Jasmin Kurtic.

As the visitors finally began to ramp up the pressure following their insipid start, Romelu Lukaku missed the best Inter chance of the half in the 38th minute. The Belgium international was slipped through by Marcelo Brozovic, but his low strike on his weaker right foot was expertly parried behind by Luigi Sepe.

Inter responded well after the break and broke the deadlock in the 55th minute through Sanchez, whose close-range shot was parried by Sepe’s outstretched arm, but it still sneaked just over the line.

Momentum was with Inter. Two minutes later and Ivan Perisic, who had a disappointing evening, elected to blast a close-range shot over the bar instead of squaring to a furious Lukaku.

But Inter's talisman would soon turn provider. On the counter-attack, Lukaku laid the ball off to Sanchez to slot in his second of the night.

Parma pulled a goal back through Hernani, who confidently volleyed home a chipped Giuseppe Pezzella cross from close range with less than 20 minutes to play, but Inter held on for a vital victory.