PL: Chelsea deepen Liverpool's crisis at Anfield with another defeat 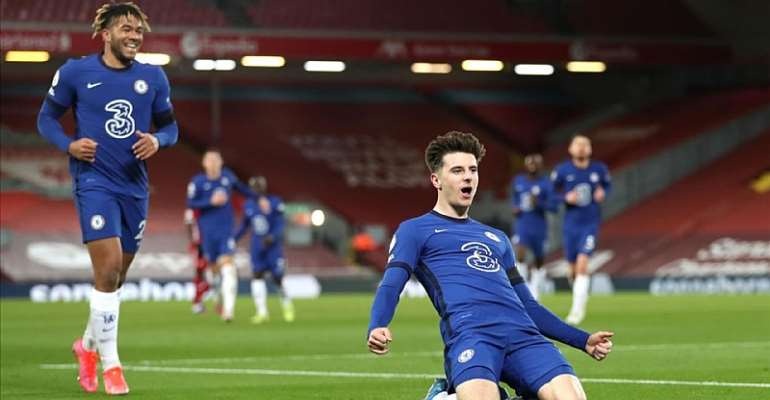 Mason Mount of Chelsea celebrates after scoring his team's first goal during the Premier League match between Liverpool and Chelsea at Anfield on March 04, 2021 in Liverpool, England Image credit: Getty Images

Liverpool’s top-four hopes suffered another major blow as rivals Chelsea continued their own charge under Thomas Tuchel with a 1-0 win at Anfield.

The Blues looked the more threatening throughout a well-contested first half with Timo Werner having a strike ruled out for offside by VAR before Mason Mount struck a sublime solo goal three minutes prior to the interval.

Liverpool once again lacked creativity in attack but it was still a huge surprise to see Mo Salah, the Premier League’s leading goal scorer, withdrawn just after the hour. The Egyptian could be seen shaking in his head in disappointment on the bench as his team struggled to find a way back into the contest.

The hosts turned to Diogo Jota but he could not inspire a recovery from the bench despite making a welcome return from a three-month injury lay-off.

The result means a highly impressive Chelsea, who are unbeaten in 10 matches under Tuchel, move up to fourth with Liverpool four points further back in seventh.

Jurgen Klopp’s champions can hardly afford any further slip ups when they entertain Fulham on Sunday, while Chelsea are at home to fifth-placed Everton in another key battle for the European places on Monday night.