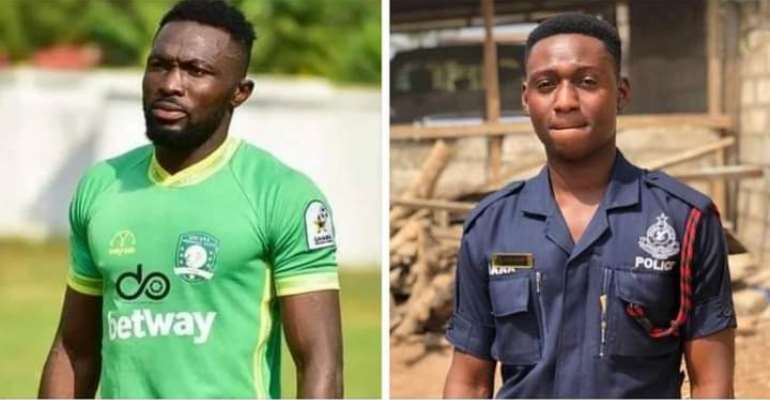 Aduana Stars defender Farouk Adams has been remanded into police custody for two weeks for allegedly crushing a police officer to death.

The former Elmina Sharks has been charged on two counts, careless and inconsiderate driving and negligently causing harm when he appeared in court on Wednesday.

His Lordship Osei Kofi Amoako, who presided over the case, ruled that Adams be kept in police custody for a fortnight so the investigation can continue.

Adams will return to court on March 18.
Lawyer Baffour Akoto, who represented Adams in court, was satisfied with the ruling, saying his client will be safe in police custody instead of basic custody, which was an option for the court.

He revealed pleading to the court for Adams to be released on bail, however, prosecutors insisted that the footballer is a flight risk.

The player, who won the NASCO Man of the Match award in week 16 of the Ghana Premier League match between Aduana Stars and Inter Allies at Dormaa.

DSP Francis Akwasi Asante, the Wamfie District Police Commander, in an interview with Kumasi-based Hello FM, revealed chilling details of how police apprehended the player after the accident.

“About three days ago, one of our men, Constable Amos Mantey was on snap check duty with other colleagues at Asuotiano on the Berekum road. He sought permission to go to town to buy mosquito repellent with a motorbike at around 7 pm.

“While he was not returning around ok10 pm, the other colleagues at the post made several phone calls to the office and some friends but he was not picking.

“The next day(Tuesday), someone called to inform the police that there has been a motor accident but he does not know the person so his colleagues rushed to the place and found that it was their colleague who sought permission. He was lying in the bush without life.

“We realized it was hit and run so we started an investigation. We saw that there was red paint on his motorbike so we suspected that the car involved was red.

“Fortunately, for us, we got someone who had a CCTV camera that captured the where the car went and parked after the incident. We took the number of the car and checked from DVLA for the owner of the vehicle.

“It led to one Adams Farouk who is a player of Aduana Stars Football Club. We went to Dormaa.

“Because of what happened they took the vehicle to Sunyani to change the doors and other things but we were able to retrieve it. Currently, the car is in the custody of the police.