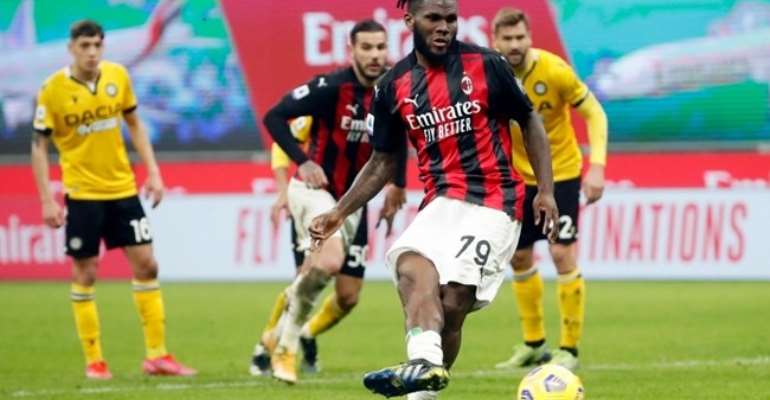 A 97th-minute penalty from Franck Kessie rescued a point for title challenging AC Milan against Udinese at the San Siro on Wednesday.

The Rossoneri had controlled possession but in the absence of the injured Zlatan Ibrahimovic, Stefano Pioli's side - fresh from a huge 2-1 victory at Roma on Sunday - struggled to break down a resilient Udinese defence.

Milan were staring down the barrel of a devastating defeat thanks to Rodrigo Becao's tame header which somehow squeezed past goalkeeper Gianluigi Donnarumma until a moment of madness from substitute Jens Stryger Larsen presented the hosts with a golden opportunity to salvage a point.

Kessie stepped up and confidently stroked home from the spot to spare Milan's blushes and keep his side in the title race.

Samu Castillejo had fashioned the home side's best chance in the opening 45 minutes but saw his effort saved by the feet of Juan Musso.

Udinese offered very little in the way of attacking threat but Milan had Alessio Romagnoli to thank for keeping the scores level after the restart, with the defender hacking Ilija Nestorovski's goal-bound header off the line.

Musso was alert to deny substitute Soualiho Meite from distance and then Franck Kessie, as Milan's frustration continued to build.

The hosts were then stunned as Udinese took the lead in the 68th-minute when Becao's tame header found its way through a crowd of players and past Donnarumma.

The Friulians looked set to record an impressive away victory until Larsen clumsily handled inside his penalty area and Kessie equalised with literally the last kick of the game.

The draw leaves Milan in second and three points behind leaders Inter having played a game more.