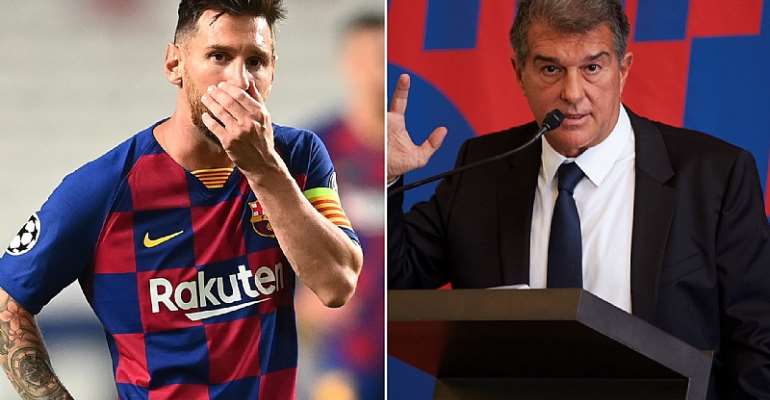 Barcelona presidential candidate Joan Laporta has issued a stark warning to the club's members, insisting Lionel Messi will leave the club if he is not elected.

Laporta is favourite to win a second spell in charge of the LaLiga giants when elections to replace Josep Bartomeu as president are held on Sunday.

Messi's future is one of the many major problems facing the club at present with the Argentine star's contract due to expire this summer. Last year, Messi wanted to leave but agreed to back down and stay for another season.

Laporta has continued to promise he will do everything possible to keep Messi at the Nou Camp while on the campaign trail and has now issued a simple warning to members before they cast their vote.

'I have a great relationship with Leo [Messi] and he will consider whatever proposal I make,' Laporta said during a TV debate on Catalonian channel RAC1 on Tuesday with rivals Toni Freixa and Victor Font.

'If I don't win, I am sure that Leo will not stay at Barcelona.

'Messi will weigh up the offer we make him. I'm convinced that if the other candidates win, Messi will not remain at Barcelona. He wasn't happy during Freixa's time on the board.'

Messi almost sensationally quit last summer in the wake of Barcelona's humiliating 8-2 defeat by Bayern Munich after growing disillusioned with proceedings both on and off the pitch.

He then threatened legal action after Barca blocked his move by demanding an astronomical £629million release clause was paid out.

Messi's latest Barca contract - which he signed back in 2016 - was recently leaked to the public and it is worth a staggering £492million. Barca find themselves in financial turmoil and have been told to reduce their spending on wages by LaLiga this week.

But Laporta - who was the president of Barcelona between 2003 and 2010 - believes Messi is not 'guided' by money and is hopeful he will agree to his offer when it comes to renewing his contract.

'He wants a competitive team to win.
'I'm sure he'll listen to my offer, just as I am [sure] that if someone else wins he will leave.'

In another crisis for the incoming president, predecessor Bartomeu was arrested on Monday along with chief executive Oscar Grau and two others for their alleged roles in 'Barcagate'.

It relates to claims that club officials launched a smear campaign against current and former players who were critical of the club and then president Bartomeu.

Messi, Gerard Pique and Pep Guardiola, their former manager and now Manchester City boss, were among those targeted by the negative stories and social media posts.

Barca have been in the hands of an interim management committee led by acting President Carles Tusquets since Bartomeu resigned but members will elect a new leader this weekend.