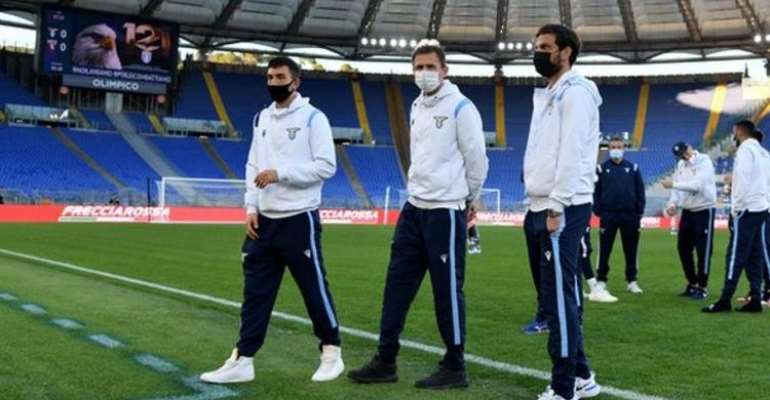 Lazio’s Serie A match against Torino descended into farce on Tuesday as the capital club named a team and turned up at the Stadio Olimpico despite their opponents being stuck in quarantine more than 600km away in Turin following a COVID-19 outbreak.

In a bizarre repeat of Juventus’ abandoned clash with Napoli earlier this season, contradictory instructions from a local health authority (ASL) and the league body resulted in Lazio turning up for the scheduled 6.30pm (1730 GMT) kickoff and waiting 45 minutes before the game was officially abandoned.

Lazio coach Simone Inzaghi named a team for the game, but his players were left to amuse themselves as some danced on the touchline and others messed around with unused pitchside camera equipment as they awaited the inevitable cancellation.

“I could say a lot of things but I’ll keep them to myself. We’ve respected the rules by coming to the stadium,” Lazio sporting director Igli Tare told Sky Italia.

“We’ll wait for 45 minutes as per regulations, then we’ll leave it in the hands of the authorities.”

The Torino squad was instructed to quarantine by the Turin ASL until midnight on Tuesday after eight players and two staff members tested positive for the coronavirus.

Their match against Sassuolo last Friday was suspended due to the outbreak, but Italian news agency ANSA reported that the Lega Serie A council unanimously decided in an urgent meeting on Tuesday that the game in Rome should go ahead as planned, leaving Torino owner Urbano Cairo furious.

“You don’t defend the league by not taking note of objective reality. We can’t leave Turin, that much is obvious,” he told La Presse.

“It’s a decision that speaks for itself. I expect logical things to be done, if you add one plus one you shouldn’t have to go through a thousand steps to get to two.”

Torino are likely to be handed a 3-0 defeat for failing to turn up for the scheduled kickoff, a punishment they are expected to appeal.

Napoli were handed a 3-0 loss and deducted a point in October after they did not travel to Turin for a Serie A match against champions Juventus, saying the ASL had told them to stay at home following positive COVID-19 cases.

It resulted in similarly chaotic scenes at the Allianz Stadium as the Juve squad and match officials turned up despite the opposition being hundreds of kilometres away.

Napoli later successfully appealed against the punishment to the Italian Olympic Committee (CONI) Guarantee Board, Italian sport’s highest tribunal, and Serie A President Paolo Dal Pino conceded that the Torino case could head the same way.

“For us the game must go ahead, but if there is a hard and restrictive attitude from the ASL, we must also make evaluations based on the decision of the CONI Guarantee Board, who unfortunately set a legal precedent with the Juve-Napoli case,” Dal Pino told Gr Parlamento radio on Monday.