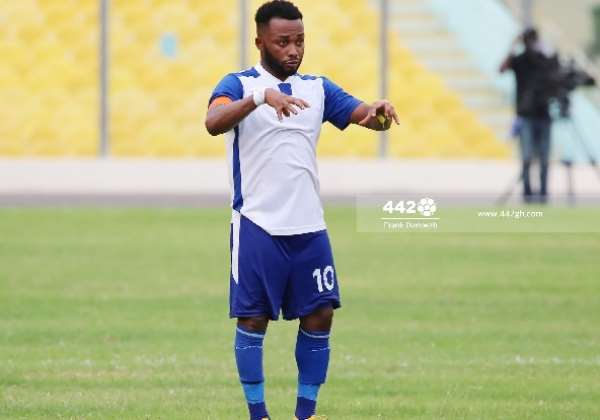 Accra Great Olympics midfielder, Gladson Awako, will stay at the club until the end of the season despite interest from clubs.

The 29-year-old has been magnificent in the ongoing Ghana Premier League season.

Awako, who was named NASCO Ghana Premier League Player of the Month for December, has scored three times this season and his inspirational leadership helped the Wonder Club to beat giants Kotoko and Hearts in the first round of the league season.

However, he has been linked to Asante Kotoko, Hearts of Oak, Medeama SC and the latest club to join for the services of the payer is Dreams FC.

However, according to Graphic Sports, a close source to the 30-year-old says, the has no plans of departing Olympics in the middle of the season but could only consider his options at the end of the campaign.

According to the source, the player has assured Olympics of his loyalty and also refuted reports linking him away from the club.

“He is not leaving the club in the middle of the season and that I can assure you,” the source said.

"Awako will stay with Olympics till the end of the campaign and that I can assure you.

“He has assured the club and I believe he will only consider his options at the end of the season when he has helped the club achieve its target of finishing in the top four.”

As captain of Olympics, Awako has inspired Coach Annor Walker's side move up to the second position on the league log with 27 points in 16 matches following their 1-0 win against Berekum Chelsea in Accra last Sunday.

Olympics will travel to the Theatre of Dreams at Dawu on Sunday to lock horns with third-placed Dreams FC in one of the week's top fixtures.

Awako has been named in the Black Stars squad for the upcoming 2021 Africa Cup of Nations doubleheader qualifiers against South Africa and Sao Tome.