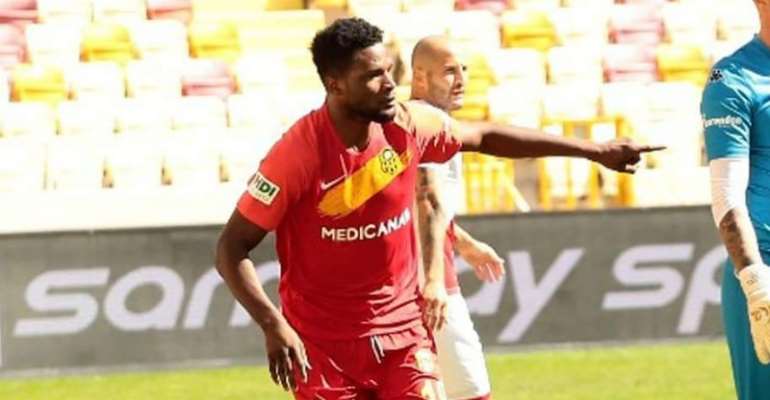 A Benjamin Tetteh strike on Friday afternoon proved crucial as it earned a point for Yeni Malatyaspor in the team’s 1-1 draw against Genclerbirligi in the Turkish Super Lig.

The Ghanaian international after becoming a key asset for his team continues to be trusted with starting roles to help the side push to amass points to better their position on the league table.

Today at the Eryaman Stadyumu he led the attack for Yeni Malatyaspor when the team played as a guest to the matchday 26 opponent.

In a game where the visitors were reduced to 10 men after just 21 minutes with the dismissal of Semih Kaya, a Benjamin Tetteh equalizer meant that Yeni led at halftime against the odds.

Going on to play 90 minutes in the exciting game that ended in a scoring stalemate, the former Ghana U-23 star earned a high rating of 7.5 for his dazzling displays according to detailed statistics provided by SofaScore.

On the matchday, an own goal from Ertac Ozbir in the 60th minute restored parity for Genclerbirligi to ensure they shared the spoils with Yeni Malatyaspor.

With today’s goal, Benjamin Tetteh has now scored three times this season in the Turkish Super Lig and also has three assists to his name from 20 appearances.