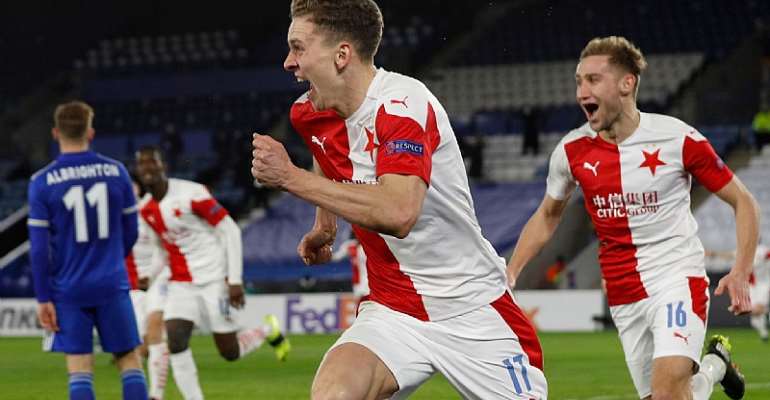 Leicester were dumped out of the Europa League by Czech side Slavia Prague after turning in a miserable display at the King Power Stadium.

With playmaker James Maddison missing with a hip injury and in-form winger Harvey Barnes left on the bench for the first hour, Brendan Rodgers' side were a shadow of the vibrant team pushing for Champions League qualification at the top of the Premier League.

Jamie Vardy was kept quiet by efficient if limited opposition and a spirited second-half showing from the visitors earned a shock win.

Midfielder Lukas Provod volleyed in the opener before 19-year-old striker Abdallah Sima wrapped up a thoroughly deserved victory with a fine low drive late on.

Slavia were raided by West Ham for defender Vladimir Coufal and midfielder Tomas Soucek in the last year and could soon be fielding more Premier League interest after this superb win.

Sima, in particular, looks a real asset.
Rodgers - who has now lost at this stage of the competition on five occasions - could still steer the Foxes into the Champions League next year, of course.

But he will have to hope that this insipid display was a one-off and not a sign that last season's late collapse could be about to be repeated.