UCL: Mendy scores a stunner as Real Madrid down Atalanta 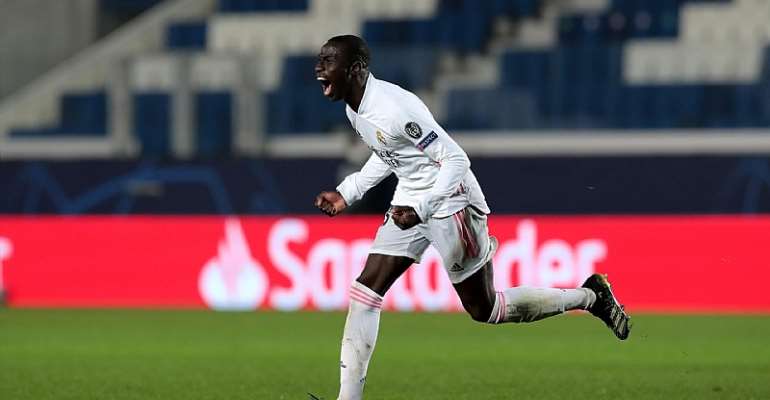 Ferland Mendy of Real Madrid celebrates after scoring their side's first goal during the UEFA Champions League Round of 16 match between Atalanta and Real Madrid at Gewiss Stadium on February 24, 2021 in Bergamo, Italy Image credit: Getty Images

A brilliant late strike from Ferland Mendy gives Real Madrid a 1-0 win over 10-man Atalanta in their Champions League last-16 first leg at Bergamo Stadium as the hosts saw Remo Freuler controversially sent off early on.

An open beginning to the first-leg tie was marred by a debatable refereeing decision. Freuler was shown a harsh straight red for bringing down Mendy on the edge of the box.

It was adjudged the Swiss midfielder denied the French left-back a clear goalscoring opportunity. Ultimately it was a questionable decision from German referee Tobias Stieler with other Atalanta defenders in the vicinity.

With Real Madrid eager to capitalise on their man advantage, stand-in false nine Isco and Luka Modric both had innocuous efforts on goal before Casemiro missed their best chance in first-half injury-time.

The Brazilian - who scored an aerial winner against Real Valladolid last Saturday - guided his point-blank header from a delightful Kroos corner straight into the body of a stunned Pierluigi Gollini.

The second half was a tale of Real Madrid dominating possession but struggling to break down a compact, resolute Atalanta defence. Modric saw two half-chances go wide while Marco Asensio had a free-kick comfortably saved.

But finally, in the 86th minute, the deadlock was broken. It was Mendy who had the key, bending a stunning right-footed strike from the edge of the box into the bottom corner.