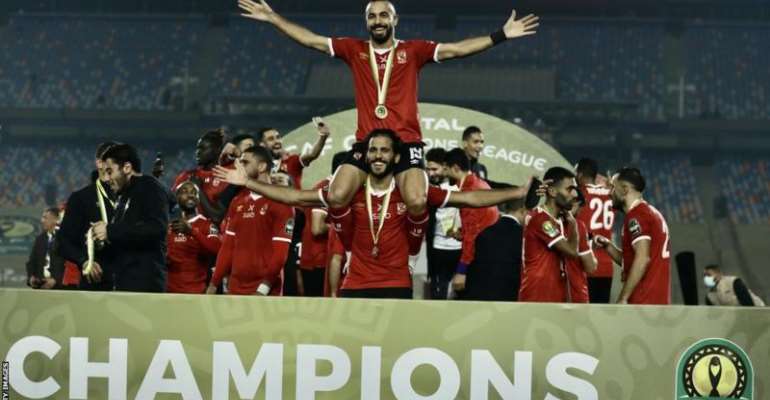 The two most successful clubs in African Champions League history were both left frustrated on Tuesday as nine-time winners Al Ahly lost and Zamalek drew.

Egypt's defending champions Al Ahly lost 1-0 in Tanzania to Simba in front of an estimated 30,000 fans.

The only goal of the Group A match was scored by Mozambique international Luis Miquissone as his fierce strike from the edge of the area neat Ahly captain and goalkeeper Mohamed el Shenawy on 31 minutes.

It is a repeat of the scoreline when these two last met in the African Champions League in February 2019.

In the other game in this group, DR Congo's AS Vita Club recovered from conceding an early goal in Sudan to Al Merrikh to win 4-1.

Elsamani Saadeldin scored after just eight minutes but Vita Club hit back thanks to a brace for Obed Mukokiani either side of a penalty for Djuma Shabani and a goals Amede Masaai.

Those results mean Simba top the group with a maximum six points, Vita Club and Ahly have three each and Merrikh remain pointless.

Simba travel to Merrikh next, then host the Sudanese side and Vita Club before the ultimate test of their title credentials on April 9 or 10, away to Ahly in Cairo.

Wydad Casablanca of Morocco, who have been champions, runners-up, and semi-finalists twice in the past five seasons, belatedly began their Group C campaign with a 1-0 win at Petro Luanda of Angola.

Ayoub el Kaabi had a penalty saved before scoring the only goal on 71 minutes after a superb pass from Libyan Muaid Ellafi.

Petro veteran Ricardo 'Job' Estevao squandered a chance to equalise soon after, blazing a penalty over the crossbar, which left his club pointless after two rounds.

In the other Group C game the group-stage debut of South African club Kaizer Chiefs proved an anti-climax as they were held 0-0 by Horoya of Guinea in Soweto.

Four-time champions Esperance of Tunisia stayed top of Group D thanks to an Abderraouf Benguit equaliser in a 1-1 away draw with Mouloudia Alger.