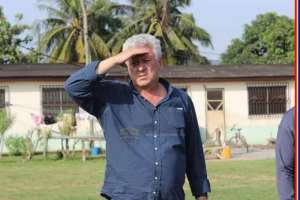 The head coach for Hearts of Oak, Kosta Papic has refused to accept the assertion that Asante Kotoko are doing better than his team.

With a run of three matches without a win in the Ghana Premier League, the Serbian tactical and his Phobians have dropped out of the top four and now sitting 11th on the league standings.

While the club’s bitterest rivals have picked up form, the team from Kumasi are now top of the league table with a point gap of six over Hearts of Oak.

Speaking on the performance of his team, Coach Kosta Papic says the Porcupine Warriors are not doing better.

According to him, his Phobians have been playing well but just lacking the goal-scoring bits that will see them pick crucial maximum points.

“I don’t think Kotoko is playing better than Hearts of Oak at the moment. We are playing good football but just lacking the goals,” Kosta Papic told Nhyira FM on Tuesday.

Meanwhile, the Hearts of Oak coach has stressed that his goal for the ongoing 2020/2021 league season is to lead his team to lift the title.

“My target is to win the Ghana Premier League and when we find the winning formula, we are going to catch the teams ahead of us on the league table,” Kosta Papic added.