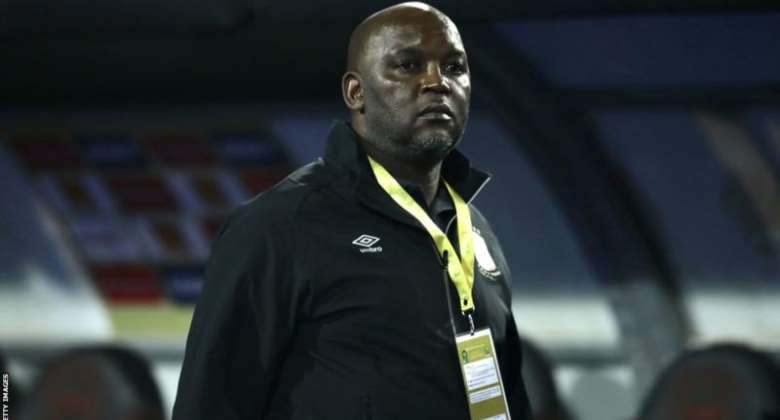 Al Ahly coach Pitso Mosimane has said he is taking inspiration from Leicester City's shock 2016 Premier League success as he leads the Egyptian side at the Fifa Club World Cup.

The prize for the winners is a semi-final game against European champions Bayern Munich on Monday.

"The level is the highest that it could possibly be and it's very difficult to win, but what's important is to go there and play to the best of our abilities," the South African coach insisted.

"[We want] everyone to see that we've done the best against the best teams in the world so there's nothing bigger for me and Al Ahly.

"Any coach that goes to any tournament believes that he can win it, but the reality is how do you beat Bayern Munich - who have just defeated the mighty Barcelona 8-2 on aggregate with Lionel Messi on the pitch?

The global coronavirus pandemic means stadiums at the delayed tournament in Qatar will only be at 30% capacity.

Al Ahly board member Khaled Mortagy says his side is missing out on what could have been fantastic support had fans been allowed to attend matches.

"There are a lot of Egyptians living here, which was obvious from the way we were welcomed at the airport by our fans wearing the red jerseys and cheering our club," he told BBC Sport Africa.

"It made our players look into how they make these people happy. I believe if it was in normal circumstances, the stadium would have been full with Al Ahly supporters, so it's a pity, but we have to comply with the regulations in this extraordinary time."

"The focus is to win the first game and then take it from there I don't think anyone is looking at anything else. We are playing against a very good team - they have got 5 or 6 international players - so we have to take it step-by-step."

"It is a match that everyone is waiting for with lots of quality players," said Benatia. "I know Egyptian teams - they have high-quality players and I know they will be a tough opponent with their combative style and it will be a match of high level."

"But we have good quality and are in a good form ourselves. We work well so I think we have the ability to cause them problems."

Mortagy says that Mosimane has settled in well at Al Ahly since taking over in September when one of his first tasks was to win the African Champions League.

A convincing 5-1 aggregate win over Morocco's Wydad Casablanca in the semi-finals was followed by a 2-1 victory over arch-rivals Zamalek in the final.

"He is a great coach and a world-class coach too, and he has adapted very well to our club," Mortagy explained.

"The aim of bringing him - especially during the semi-final and final of the African Championship - was to have someone who has the experience and who knows the opposition player.

"He is beloved by the players, works very hard and at the same time, he thinks with a long-term strategy and wants to make something for the future.

"He has the spirit of the club, he knows exactly the values of the club and at the same time, being Al Ahly coach is a great value for him - he wants to leave a legacy for himself at the club."

This will be Al Ahly's sixth appearance at the Club World Cup but their first since 2013, and they'll be looking to improve on their best finish in 2006 when they finished third.

While Thursday's winners face Bayern Munich, the losers will play in the fifth-place game.

That play-off will be against the losers of the other quarter-final between North and Central American champions UANL of Mexico and Asian champions Ulsan Hyundai of South Korea.