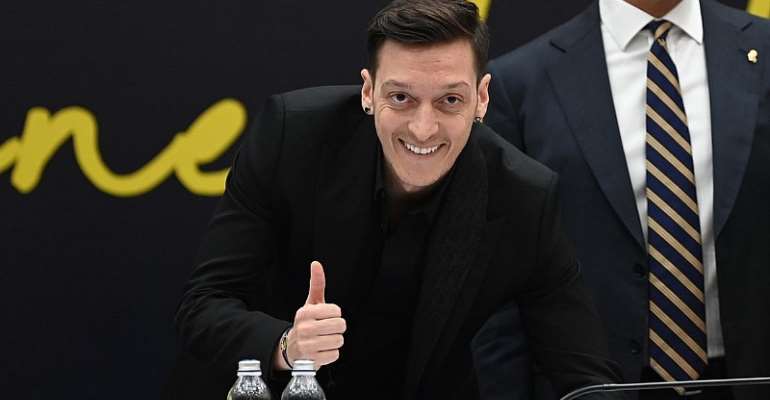 Mesut Ozil at his presentation as a Fenerbahce player Image credit: Getty Images

Mesut Ozil says his “dream” is to play in the Champions League with Fenerbahce, having moved from Arsenal on a three-and-a-half-year contract at the weekend.

The German World Cup winner, who has joined a club he supported as a child, says he’s not yet sure when he will be fit enough to make his debut, and whether that’ll be in time for the Istanbul derby with Galatasaray on Saturday 6 February.

Ozil was presented to the media on Wednesday when it was confirmed he will wear the number 67 on the back of his shirt, believed to be a reference to his family’s Turkish hometown of Zonguldak, which has 67 in its postcode.

The attacking midfielder says he’s fulfilled a lifelong ambition by moving to the club.

Ozil’s next aim is to keep his team in the Champions League qualification spots, and push for the Super Lig title. Fenerbahce are currently second in the table, two points behind another Istanbul rival, Besiktas.

"I believe Fenerbahce are contenders to be champions every season and hopefully we'll do it as soon as possible”, he said.

“The dream is to play in the Champions League. I've been used to playing under pressure, and I know there will be pressure here too.

I'VE PLAYED WITH BIG CLUBS BUT FENERBAHCE IS SOMETHING ELSE FOR ME. I APPRECIATE THE CLUB SO MUCH AND HOPEFULLY, EVERYTHING WILL BE BEAUTIFUL. Before securing the deal, Fenerbahce club president Ally Koc claims he spoke to former Arsenal manager Arsene Wenger, who gave a ringing endorsement for Ozil.

"Arsene was so positive about Mesut and so he spoke with our manager. It was a very fruitful conversation”, said Koc.

"During our conversation, Mesut mentioned his dreams to play for his childhood club, and for this, he said he wouldn't make the financial aspect an issue. It was then that our journey to sign him truly started."