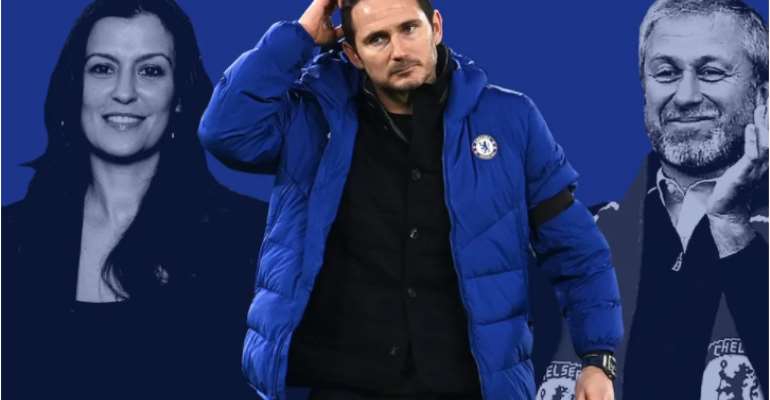 When Chelsea confirmed the return of Frank Lampard as head coach in July 2019, the statement, which sat under a picture of the club’s record goalscorer next to director Marina Granovskaia, announced he had signed a three-year contract.

In actual fact, that deal was two guaranteed years with the option of a third which means Chelsea will presumably only have to pay Lampard six months’ of his annual wage, around £2 million, as severance.

Whatever the good long-term intentions of Chelsea at the time, the fact the option of the further third year was never taken up at the end of Lampard’s first season in charge will leave conspiracy theorists wondering whether or not the doubts inside Stamford Bridge were present long before this season’s run of five defeats in eight Premier League games.

Lampard, in many ways, was the only choice for Chelsea after Maurizio Sarri had left for Juventus, at a time when the club had sold their best player, Eden Hazard, and were serving a transfer ban. That is not to say he did not deserve the job or due diligence was not carried out, but Stamford Bridge did not have its normal pulling power.

The Blues would have been impressed by his work at Derby County, who he took to the Championship play-off final, but Lampard also provided the club with some positive PR, both with supporters and beyond Stamford Bridge, at the time they most needed it.

Now, 18 months later, Lampard and his backroom staff will be wondering whether they were ever the long-term choice of owner Roman Abramovich and the Chelsea board or whether they were always viewed as the best option to get the Blues through a particular period that effectively finished at the end of last season.

Lampard knew the rules of engagement at Chelsea better than anybody and he had been warned by former managers of the club that the Stamford Bridge job was unlike any other in European football.

And yet even the 42-year-old, who played under 10 different Blues managers, would have been taken aback by the ruthless nature of the Chelsea hot seat after it became clear that Champions League qualification and an FA Cup final at the end of his first season in charge was viewed as a passable achievement, rather than any sort of success within the club.

Rather than being called in to discuss his impressive work with the club’s academy graduates or extending his contract into its third year, Lampard was left in no doubt that fourth place would never be considered good enough for Abramovich’s Chelsea - no matter the circumstances.

That is not to say Lampard was never backed or supported because he was. Chelsea spent £220m on new players last summer, including £50m on left-back Ben Chilwell whose signing was very much pushed by the head coach.

Abramovich even took the unprecedented step of explaining his decision to sack Lampard in Chelsea’s confirmation statement, but the Russian had not offered any words of encouragement at the end of Lampard’s first season in charge or during this season’s 17-game unbeaten run in all competitions that had seen the Blues briefly move into Premier League title contention and breeze into the last-16 of the Champions League.

Instead, Abramovich and the Chelsea board were more worried by the fact the club had finished last season 33 points behind leaders Liverpool and 15 back of second-placed Manchester City.

Concern over that gap, which Lampard was informed had to be closed, prompted the eye-catching summer transfer business and also explained why Chelsea were getting twitchy as soon as this season’s unbeaten run ended against Everton at Goodison Park. Lampard’s side were beating the teams below them, but not those they were meant to be fighting closer to the top of the table.

Lampard not only faced questions from journalists overpressure on his position after back-to-back defeats to Everton and Wolverhampton Wanderers, he and his backroom team were also under scrutiny from inside the club - underlining the feeling of those around Lampard that Chelsea were always looking for the first available way out of their experiment.

His experience of the club as a player meant that Lampard knew he could not worry too much about any discussions that may have been taking place above him, but he was deeply concerned by the impact of being left such an inflated squad to manage.

Like many Premier League clubs, Chelsea found it difficult to sell players last summer because of the financial consequences of the coronavirus pandemic and Lampard was left with a large, unbalanced squad, full of internationals and senior professionals.

The potential problems quickly became apparent as Antonio Rudiger was relegated down to fifth-choice centre-back and was left out of a series of matchday squads, with Lampard open to allowing the German international to leave.

Rudiger is understood to have clashed with Cesar Azpilicueta on more than one occasion, as Chelsea’s captain attempted to ease tensions between players at Chelsea’s Cobham training ground.

Some of the young players who have performed so admirably for Chelsea and Lampard are believed to have complained about the treatment they received from disgruntled team-mates and accusations of certain graduates being favoured have not always been solely confined to social media.

But, just as Chelsea could not sell another two of the players Lampard would have allowed to leave, Marcos Alonso and Jorginho, Rudiger stayed put and managed to work his way back into the team, puzzlingly starting back-to-back Premier League games against Fulham and Leicester.

Alonso was frozen out completely after storming to the team bus after the chaotic 3-3 draw at West Bromwich Albion, and, as has been the case on so many occasions at Chelsea, the unhappy players have outlasted the manager.

The arrival of Lampard’s successor, Thomas Tuchel, will be seen as a positive move for two of his German compatriots Timo Werner and Kai Havertz, who have both struggled to adapt to life at Chelsea. Werner’s problems have occasionally looked mental, as well as physical, while there is a feeling that we may not see the best of Havertz before next season.

Chelsea dispute theories that the disappointing form of Werner and Havertz has been instrumental in Lampard’s sacking, instead pointing to a lack of confidence that has been running throughout the group for well over a month.

Statistics and trends are taken seriously by Abramovich and his small team of advisors, so the fact Lampard sits at the bottom of a table listing the points-per-game ratio of Chelsea managers during the oligarch’s reign weighed heavily against him, as did the fact that, at the halfway point of the season, West Ham United were the only team in the top half of the table that the Blues have beaten.

Abramovich had wanted to see evidence that momentum could shift back in Chelsea’s favour and the feeling among Lampard and his staff had been that they would get a chance to close some ground on the top four in the Premier League games against Wolves on Wednesday night and then Burnley, following Sunday’s FA Cup victory over Luton Town.

But Abramovich’s mind was already made up and there will be a nagging sense that Lampard was always fighting a losing battle to be given time at the club he gave almost 15 years to.

Election Petition: I disagree with process of trial and ruli...
44 minutes ago