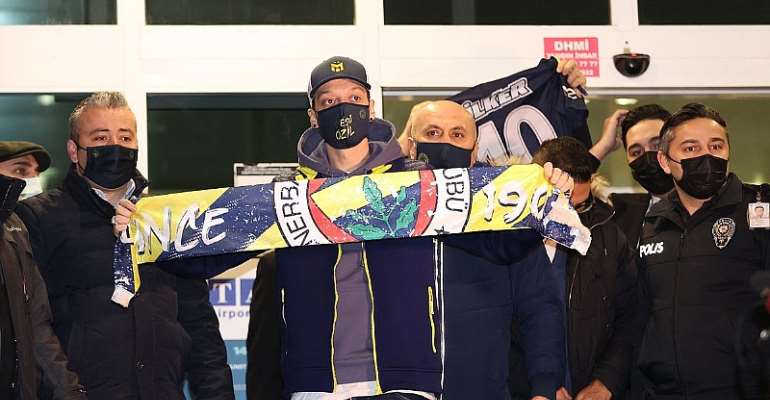 Mesut Ozil has completed a permanent transfer from Arsenal to Fenerbahce, the Premier League club have announced.

The move brings an end to Ozil’s eight-year stint with Arsenal, having joined the club from Real Madrid in 2013.

"We thank Mesut for his huge contribution to Arsenal," said technical director Edu.

"We would like to thank Mesut and his team for their professionalism during our recent negotiations. I know everyone associated with Arsenal will join me in wishing Mesut and his family the best of health, success and happiness in the next chapter of his career.”

Ozil, a then-club record acquisition at £42 million in 2013, won the FA Cup on four occasions with the Emirates club. However, he found himself increasingly marginalised after Arsene Wenger left, and was omitted from the Premier League and Europa League squads by Mikel Arteta this season.

The 2014 World Cup winner paid tribute to the club and its fans upon his exit.

“I’d like to thank the club for this amazing journey over the past seven-and-a-half years," Ozil began.

"Together we won trophies for the first time in years and created memories that will last a lifetime. The Arsenal fans will forever remain in my heart.

I’D LIKE TO THANK EDU GASPAR FOR HELPING BRING ABOUT A PROFESSIONAL AND DIGNIFIED SOLUTION IN THE PAST FEW DAYS, AND I WISH EVERYONE AT THE CLUB THE BEST IN THEIR ATTEMPT TO CONTINUE TO BRING ARSENAL BACK TO THE TOP, WHERE WE BELONG.

Ozil, one of the highest-paid players at the club, has not played since March but Arsenal boss Arteta insisted it was a privilege to coach the 32-year-old.

IT WAS A PRIVILEGE TO PLAY ALONGSIDE HIM AND, MORE RECENTLY, COACH HIM. HIS CREATIVITY AND VISION LED TO MANY GOALS DURING HIS TIME IN THE ARSENAL SHIRT.

"Mesut was at the heart of many great moments for this club over the years, including those three FA Cup final wins. These successes will always be part of our history. We thank Mesut and wish him all the best with Fenerbahce.”

Reason why Kwame Nkrumah's children were prevented from seei...
57 minutes ago