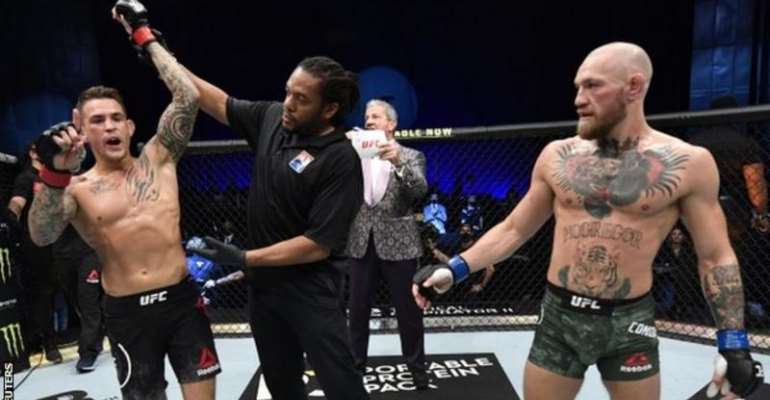 Dustin Poirier (left) has had nine mixed martial arts fights since November 2016, while Conor McGregor has had just three

Former two-weight world champion Conor McGregor was left stunned on his return to the UFC as Dustin Poirier claimed victory in their rematch at UFC 257.

McGregor came out of retirement for a third time to face fellow 32-year-old Poirier at Abu Dhabi's Fight Island.

And although the Irishman edged the first round, Poirier unleashed a flurry of punches to seal a technical knockout two minutes 32 seconds into round two.

"I'm gutted, it's a tough one to swallow," said McGregor.

"I felt stronger than him, but his leg kicks were good. I didn't adjust. My leg was badly compromised, I've never experienced those low calf kicks, and I wasn't as comfortable as I needed to be.

"I have no excuses. It was a phenomenal performance by Dustin. I have to dust it off and come back. I need activity, you don't get away with being inactive in this business."

When the pair first met in a featherweight bout in September 2014, McGregor stopped the American inside 106 seconds, setting "the Notorious" on course for global stardom. He became the UFC's first simultaneous two-weight champion before facing Floyd Mayweather in one of the richest bouts in boxing history in 2017.

Poirier, meanwhile, had to gradually work his way back into title contention and is now the number-two ranked lightweight contender, losing just two of his 13 fights since 2014. 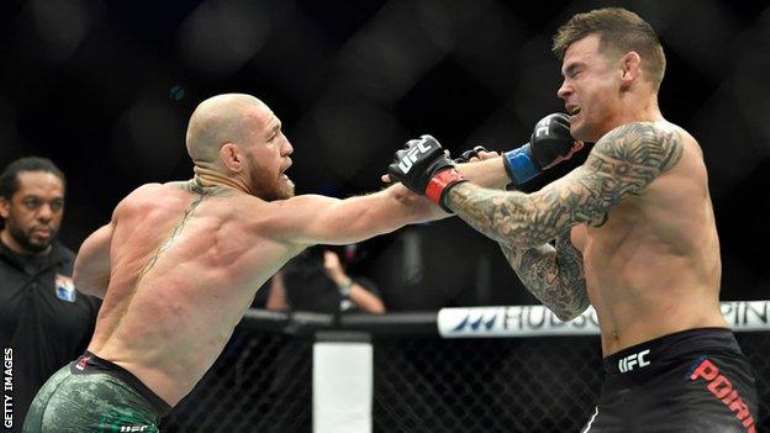 McGregor has been relatively inactive though. Since losing to Khabib Nurmagomedov in 2018, he has had just 40 seconds in the octagon - beating Donald 'Cowboy' Cerrone in style last January.

But McGregor seemed to start well in front of about 2,000 fans at the new 18,000-capacity Etihad Arena. He survived an early takedown and pinned Poirier against the fence for most of the first round, landing a few shoulder strikes like those that did so much damage against Cerrone.

McGregor said before the fight that what motivates him now is building a "highlights reel like a movie", and he tagged Poirier with a couple of right-hand shots. But, unlike their first fight, Poirier was unmoved.

Poirier admitted McGregor won the mind games before they met in 2014. This time round, instead of swapping verbal barbs before the fight, McGregor pledged to donate $500,000 (£367,000) to Poirier's charity and at the weigh-in, Poirier presented McGregor with a bottle of his own brand of Louisiana hot sauce.

And it was the American southpaw that brought the heat midway through the second round. Having replied to that early pressure with a series of leg kicks, he pounced to inflict the first TKO/KO defeat of McGregor's MMA career and take his own record to 27-6.

"It was a lot of things, but it wasn't payback. That wasn't the driving force," said Poirier.

"The first time I was a deer in the headlights. This time I was just fighting another man who bleeds like me.

"The goal was to be technical, pick my shots and not brawl at all. Then I had him hurt so I went a little crazy." 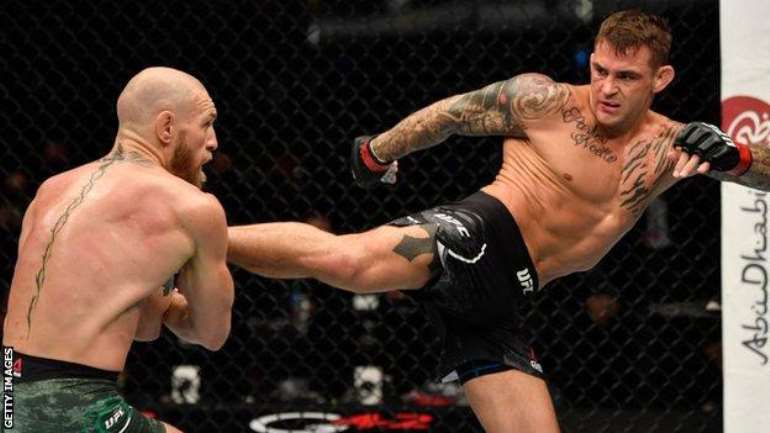 Nurmagomedov's title is yet to be vacated and UFC president Dana White said this week that the Russian may consider returning for a rematch with McGregor or Poirier if he "saw something spectacular".

But speaking after UFC 257, White said: "He said to me, 'be honest with yourself, I'm so many levels above these guys. I've beaten these guys'.

"I don't know, it doesn't sound very positive, but he won't hold the division up."

Poirier said: "It was a great win, but to come in and beat a guy I just beat and get a title shot? I've had more than 20 UFC fights, fighting the toughest of the toughest guys to get my hands on gold [a belt].

"Let Chandler and Charles Oliveira go at it. That [Chandler] doesn't interest me at this point - or I'll go and sell hot sauce. A rematch with Conor interests me, and I've always wanted to beat Nate Diaz."