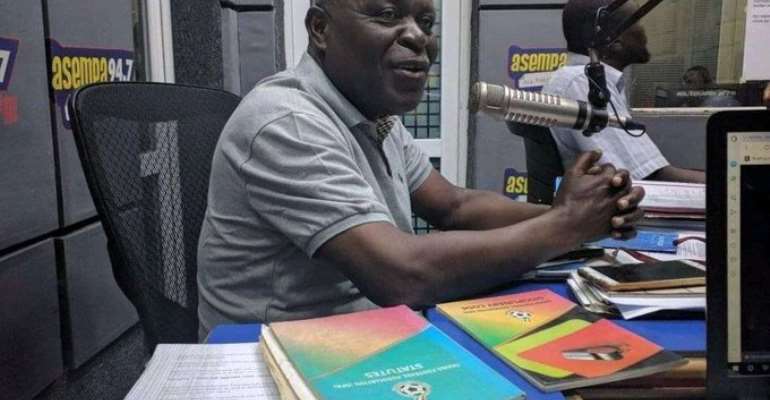 Veteran football administrator, Kofi Manu has waded into the dismissal of Isaac Asiamah as the Youth and Sports Minister.

The Member of Parliament of Atwima Mponua has been dismissed from office after serving as the Sports Minister for the past four years.

His dismissal came as a surprised to many football enthusiasts. Under the leadership of Asiamah, 10 austro turf pitches was constructed across the regions.

But according to the former Ghana Football Association [GFA] Player Status Committee chairman, Mr Asiamah deserves this dismissal due to the visa scandal that hit the country ahead of the for the Olympic Games that was held in 2019 in Australia.

He also stressed that some of the utterances by Asiamah during the 2019 Afcon in Egypt was needless and therefore not stunned with the dismissal of Hon. Asiamah.

"Isaac Asiamah is my friend but I knew he will be booted out from office as the Youth and Sports Minister," he told Adom TV.

"If you look at what happened in Australia, it was embarrassing. The scandals was swept under the carpet but President Akufo Addo was clearly not happy.

"During the 2019 African Cup of Nations [Afcon] in Egypt, Asiamah made some utterances which was absolutely needless and at the end of the day, Ghana could not win the trophy. So for me, I knew there is no way Hon. Isaac Kwame Asiamah will be retained as the Sports Minister," he added.

The Australia Visa Scandal arose after 50 people who paraded themselves as journalists were refused entry into Australia for the Olympic Games by their Immigration Service after sufficiently failing them.

About 50 people who posed as journalists from Ghana were denied entry into Australia for the games for failing to meet the criteria set for journalists.

They were deported to Ghana and investigated by appropriate authorities on their arrival, triggering speculations that then-deputy Sports Minister, Pius Hadzide, who was in charge of the Ghana contingent had attempted ‘smuggling’ them into Australian on false pretenses.

Meanwhile, President Akufo-Addo has nominated Mustapha Yusif, the former Executive Secretary of the National Service Secretariat (NSS) as the Minister of Youth and Sports designate.

His nomination was confirmed on Thursday, 22 January 2021 in a statement from the Presidency on the list of ministerial appointments for President Akufo-Addo’s second term.

The Member of Parliament (MP) for Yagaba Kubore will replace the former Sports Minister, Issac Asiamah.