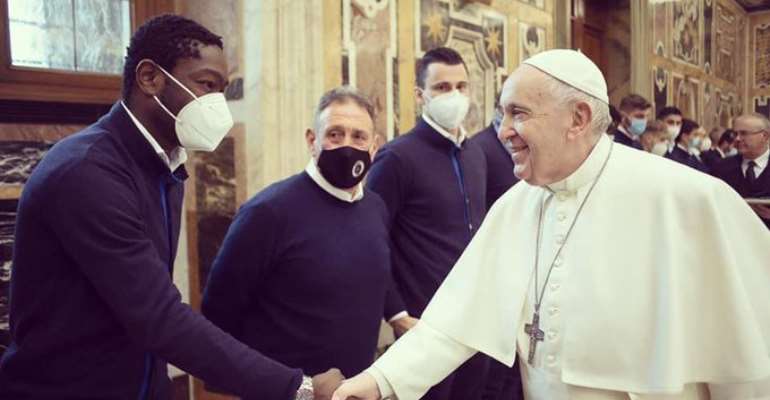 Ghanaian forward Emmanuel Gyasi has met the head of the Catholic Church, Pope Francis at the Vatican City at Rome.

Gyasi, together with his Spezia teammates paid a courtesy call on the Pope during their visit to Rome to play AS Roma in the Coppa Italia.

The Palermo born forward was rested as Spezia shocked Roma 4-2 at their own backyard earning praise from the Pope.

“In Argentina, they dance tango, and tango music is in two-four time, and today, you are 4-2,” said Pope Francis.

He also urged the newly promoted Serie A club to work hard as sportsmen insisting sports is a noble profession.

The team gave the Pope a Spezia Jersey with the number 1 on it as well as some souvenirs.

“I like to see young men and women's efforts in sports because sports are a marvel. Sports bring out the best in us. Continue with this because it is very noble,” said the Pope.

The 27-year-old is enjoying his debut top-flight season in Italy, playing a pivotal role for the Eagles as they lie 13th on the table.

He is expected to play a vital role when they play Roma again on Saturday.

Gyasi is yet to make his debut for the Black Stars.