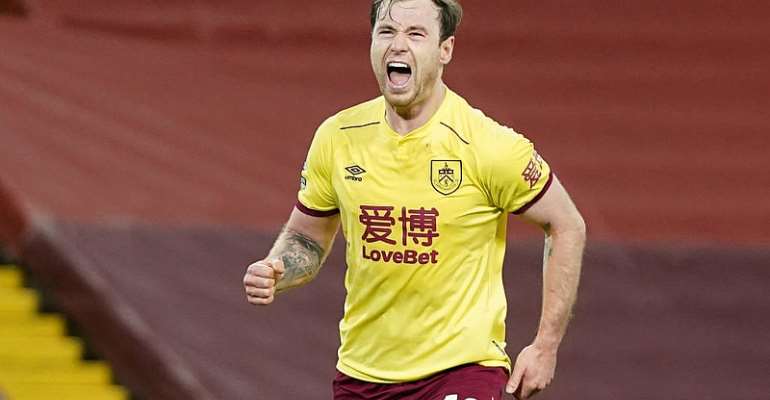 Burnley pulled clear of the relegation zone in the English top flight after inflicting a first league home defeat in four years on champions Liverpool.

Ashley Barnes scored from the penalty spot seven minutes from time at Anfield to register his 100th goal and terminate the 68-game unbeaten run in Premier League fixtures stretching back to April 2017.

“To get my 100th goal at a place like Anfield is special,” the 31-year-old striker told Burnley's website.

"Before I picked up the ball I knew where I was going to put it,” he added.

“It went exactly where I wanted it. It's a big achievement to get to 100 goals but more importantly we came here, did the job and got the three points."

Slump
The 1-0 defeat, the fourth consecutive game in which Liverpool have failed to hit the target, leaves Jurgen Klopp's men six points off pacesetters Manchester United after 19 matches.

“To win football games we have to score goals, there is no doubt that," said Klopp.

“That is what we have to change and have to do. But if things don't work, we have to work harder, to do the right things for longer, be more consistent - all of these kind of things.”

Liverpool's last goal in the Premier League came on 27 December in a 1-1 draw at home with West Bromwich Albion. Since then they have taken taken two points from a possible 12.

Success
Burnley went into Thursday night's game on the back of consecutive defeats to Manchester United and West Ham United.

The success moved Sean Dyche's team up one place to 16th.

"We know we're better than where we are in the league,” said Barnes. “A couple of the teams around us have won lately so we knew it was vital for us to get something.

"It's the team performance that stood out and everyone deserves credit. I believe in every one of my team mates.

"You know they're right behind you and the reaction I had in the changing room when I walked back in was something special."