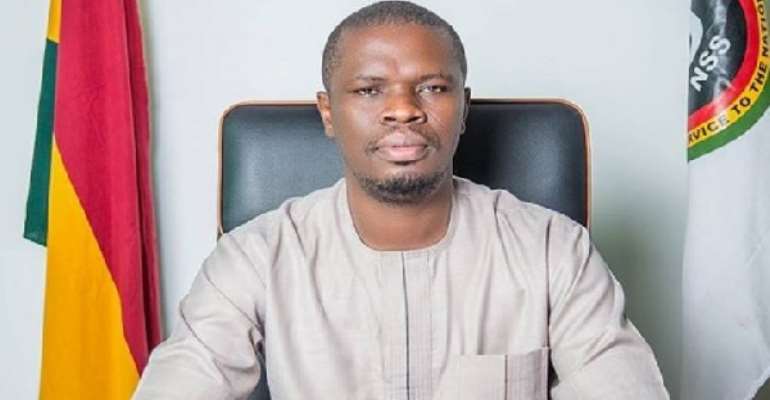 In the vibrant sports media circle, the name Mustapha Ussif, did not ring a bell, so it predictably sparked discussions in the media, with the lead question, Mustapha who?

Now it is official! Mr. Mustpha Ussif, the newly elected Hon. Member of Parliament for Yagaba Kubore Constituency in the North East Region, is President Akufo-Addo’s nominee for Minister of Youth and Sports.

With the formal confirmation of Hon. Mustapha's nomination by Jubilee House, the question of who is Hon. Mustapha Ussif is expected to skyrocket, and understandably so.

An alumnus of Salaga Secondary School, Bagabaga Teacher training College and Anglia Ruskin University Chelmsford, the University of Wales and University of Gloucesterhire in the UK,

Mustapha is a quiet, affable and a consummate administrator who is not a neophyte as far as public service is concerned.

He was one of the brightest stars of the just-ended first term of the Akufo-Addo administration as Executive Director of the National Service Scheme.

President Akufo-Addo appointed Mustapha to the NSS in the early days of his administration in February 2017, at a time public confidence in the NSS was low due to the Scheme's scandalous past. Mustapha was to repair its dented image, restore public confidence, continue with the revival of the scheme and make it the strategic youth development agency the Akufo-Addo government envisaged.

With the support of his staff and board, Mustapha was able to remarkably turn around the fortunes of the NSS and restored its dignity and public confidence within his 4 year mandate.

Not only did he oversee a scandal-free institution, he also implemented the biggest technological innovation at the NSS by digitizing several NSS services, which prevented people travelling across the country to access NSS services.

The NSS, under his watch, also adopted a smart delivery system, which delivered certificates directly to persons who had completed their national service.

In addition, the Mustapha-led NSS also revived the Scheme's farms by significantly improving production levels at all the farms.

Now, with his nomination and possible confirmation by Parliament, the young administrator is moving into a completely new terrain, but a terrain which requires the sort of attributes that made him successful at the NSS.

Eventhough the sports terrain is relatively more volatile than the NSS in terms of public interest and media scrutiny, the Hon. Mustapha has demonstrated he has got the calmness to cool heads, and the firmness to be decisive when necessary.

In an administration in which President Akufo-Addo has drastically cut down the number of his Ministers, anybody who makes his ministerial list, from the array of highly qualified NPP members, must really be somebody the President has enormous faith in.

Mustapha is in to succeed Hon. Isaac Asiamah, a man many have credited as one of the most successful sports ministers of the 4th Republic. For the President, himself a keen sports enthusiast, to bring in the immediate past boss of the NSS to succeed Isaac Asiamah, clearly indicates the trust Mr President has in Mustapha to continue with the NPP's impressive sports achievements.

These are the broad areas of focus for the government, and with Mustapha's record at the NSS as a creative and visionary administrator, he is better placed, from experience to introduce lots of innovation with regards to sports funding and promotion.

The new nominee has proven he is a relentless fighter who pursues his targets.

He had a target, a dream and a vision for the NSS. He pursued the dream and achieved his target.

This relentless spirit, as well as the vision he showed at the NSS, will be needed at the Sports Ministry where so much innovation is needed to open more opportunities for the over 40 associations.

And oh, to the ever-vibrant sports media, you have a new friend. A friend who needs your encouragement, support and constructive suggestions to move Ghana Sports forward.

Modern Ghana Quote Reports
Catch up with all the political quotes from our politicians.
Sponsored
More Opinion
Modern Ghana Links
What at all is wrong with Accra Hearts of Oak?
How Akufo-Addo-led government impacted Ghana Sports by creating sports facilities while transforming existing ones
The footballer raped and murdered for being a lesbian
FEATURE: Stepping into the big shoes of their fathers, meet talented Jacob Kingston and Rodney Appiah
My Jerry John Rawlings’ experiences: How fleeting this life here on earth…
FEATURE: How Gladson Awako turned around his career
Why Lampard must be given time at Chelsea
Jerome Otchere writes: Kotoko: Confronting the bitter truth
Mourinho’s Masterclass Against Pep, A Sign Of A Trophy In The Offing?
Quote Reports Dossiers
TOP STORIES