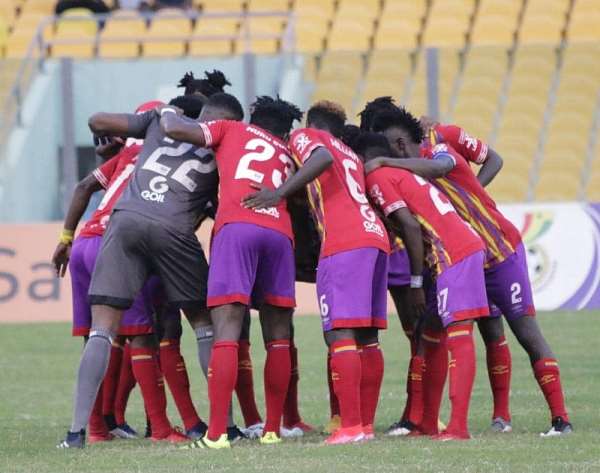 The matchday 9 of the 2020/21 Ghana Premier League produced some intriguing results at the various stadia.

On Sunday, rejuvenated Karela United climbed back to the top of the Ghana Premier League table following a 4-1 win over Berekum Chelsea.

The big win is their fifth successive win at home this season.

Striker Taylor Diawisie broke the deadlock for the home side in the 12th minute before John Andoh restored parity for the visitors in the 29th minute to end the first-half 1-1.

Karela began the second-half strongly and deservedly restored their lead through Kwame Boateng in the 46th minute and in the 60th minute to put the game beyond the reach of the visitors.

Diawise scored the fourth goal for the hosts in the 74th minute, and his 6th of the season to seal the win for Karela United.

The Academy Boys held the Porcupine Warriors to a 1-1 drawn game.

Daniel Lomotey Agbloe put the host in the lead in the 29th minute after several attempts at goal and WAFA ending the first half with their noses in front.

However, in the second half, Asante Kotoko came to the party and finally got the equalizer as Kwame Poku put the ball in the back of the net in the 62nd minute.

At the Len Clay Stadium in Obuasi, AshantiGold were held to a goalless stalemate by Medeama on Sunday.

But in the 53rd minute, Medeama saw their goal attempt saved by Ashantigold goalkeeper.

AshantiGold’s first goal attempt came in the 61st minute after Hans Kwofie volleyed a cross from Yaw Annor but goalkeeper Boateng saved the situation for the visitors.

Both teams tried to find the back of the net but their attempts failed to result in a goal.

CK Akonnor, who is the head coach of the Black Stars was at the stadium to watch the game.

At the Nana Gyeabour Park, Bechem United were held to a 1-1 drawn game against Dreams FC on Sunday.

The home team took the lead in the early stages of the first-half through a penalty which was converted by Moro Salifu in the 10th minute,

However, Issah Ibrahim converted a late spot-kick in the 74th minute to snatch a late point for Dreams.

Elsewhere at the Nana Agyemang Badu Park in Dormaa, Aduana Stars returned to winning ways with a 2-1 win over struggling Legon Cities.

Veteran striker Yahaya Mohammed put the home side in front in the 21st minute.

Francis Addo scored to bring his side on level but Fatawu Abdulrahaman restored Aduana’s lead in the 49th minute.

Struggling Kumasi King Faisal were held to a 1-1 draw at home by Elmina Sharks at the Ohene Ameyaw Park.

Sharks took the lead in the 39th minute through a penalty that was taken by James Bissue but the home side came into the second-half looking to equalize and were rewarded when Razak Tophic scored from a free kick in the 59th minute.

At the Accra Sports Stadium, Hearts of Oak returned to winning ways against Techiman Eleven Wonders. The Phobians recorded a 2-0 win.

Manaf Umar latched unto a cross from Fatawu Mohammed to put the home side in front.

Eleven Wonders nearly snatched the equalizer five minutes from half time when Samuel Boakye went through two defenders before pulling the trigger but Richmond Ayi produced a super save to palm it away for a corner kick.

Hearts extended their lead just three minutes into the second-half and that was enough to seal victory for the Phobians.

This is a second successive defeat on the road for Eleven Wonders after losing at the same venue to Inter Allies.

In Saturday’s only game, Ebusua Dwarfs recorded their first away win of the season after beating Liberty Professionals by 2-1 at the Carl Reindorf Park.

Abraham Wayo in the 16th minute broke the deadlock through a penalty for the Dansoman based side.

The visitors ended the game with 10 men after Simon Martey was shown the red card in the 74th minute.

Two penalties from Maxwell Nii Abbey Quaye in both halves helped the Dade Boys to earn all three points in the match day 9 encounter.

The result leaves Inter Allies in the relegation zone in 16th position while Olympics sit in 4th place with 14 points. 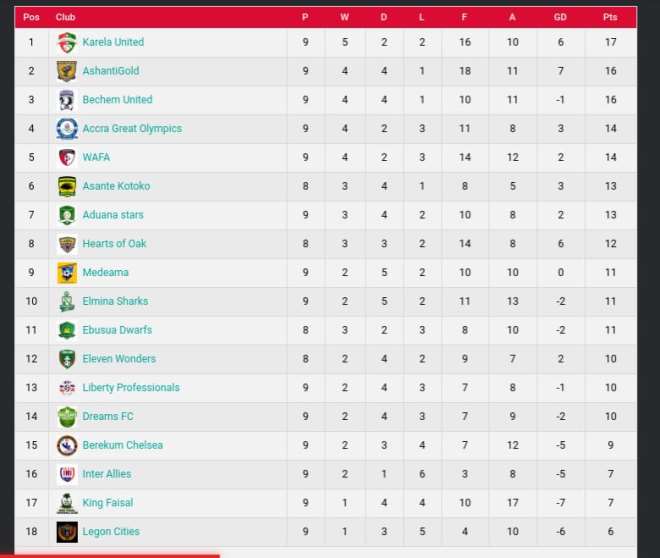