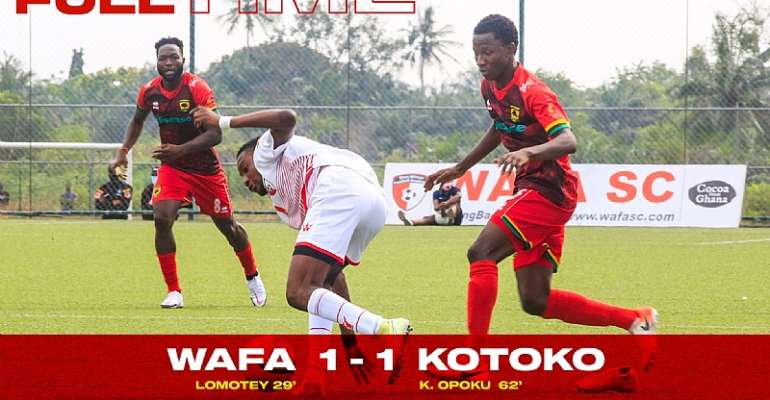 Young striker, Kwame Opoku scored his sixth Ghana Premier League goal of the season on Sunday afternoon to help his Asante Kotoko side to draw 1-1 against WAFA SC.

The attacker has been in fine form since the new 2020/2021 football season commenced.

Today, he was handed a starting role to lead the lines for the Porcupine Warriors when they played as guests to the Academy side in Sogakope.

On the matchday, an impressive performance from WAFA SC in the first half saw the team deservedly go into the break with the lead.

Star man Daniel Lomotey made use of a good chance in the 29th minute to hand his team the advantage to take into the break.

After recess, Asante Kotoko came in strong in the quest to crawl their way back into the game.

In the 62nd minute, the efforts of the team paid off with danger man Kwame Opoku latching onto a precise through ball before firing his effort into the back of the WAFA SC net.

With today’s equalizer, the striker now has six goals to his name this season and a strong contender for the top scorer award at the end of the Ghana Premier League season.