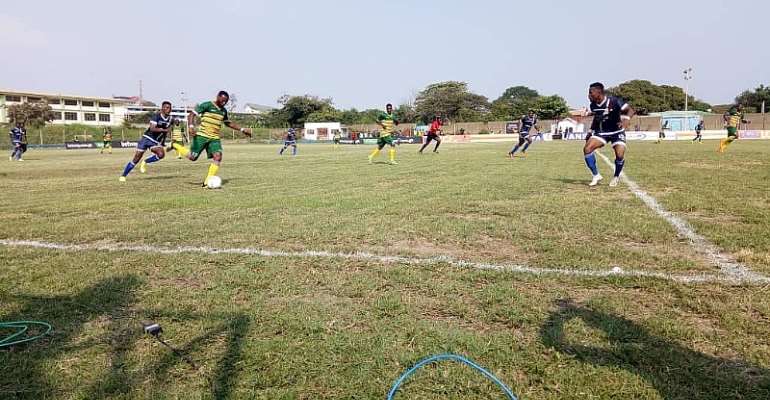 A resilient performance from Ebusua Dwarfs on Saturday afternoon has seen the team come from behind to defeat Liberty Professionals 2-1 in the Ghana Premier League.

With a good start to the game, Liberty Professionals earned the chance to take the lead when the team was given a penalty kick in the 16th minute.

Midfielder Abraham Wayo accepted the responsivity and made no mistake by converting to give the home team the advantage.

Later on, Ebusua Dwarfs came in strong and enjoyed the better of possession in their quest to get back into the game.

Fortunately for the Crabs, their efforts paid off in the 38th minute when Michael Ohene Asamoah scored with a thumping header after connecting to a well-taken corner kick.

Going into the break on level terms, Liberty Professionals and Ebusua Dwarfs returned for the second half keen on getting the better of each other.

At the end of the pulsating encounter, an 83rd-minute equalizer from Sumiala Imoro has powered Ebusua Dwarfs to a hard-earned 2-1 win against Liberty Professionals.

The massive away win sees the team climb to eight on the Ghana Premier League standings.