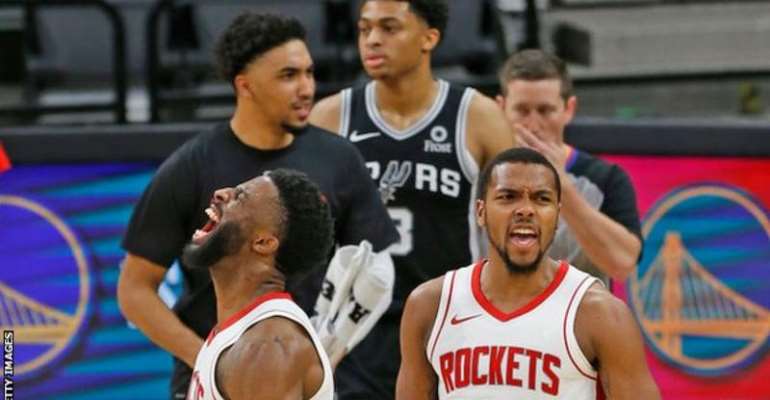 The Houston Rockets began life after James Harden with a first away win of the season at the San Antonio Spurs.

Christian Wood scored 27 points and had 15 rebounds as the Rockets came from behind to win 109-105.

Harden, the top scorer in the NBA for the past three seasons, left the franchise to join the Brooklyn Nets in a multi-team deal this week.

Asked about the side's mentality following Harden's departure, Wood likened their resilient spirit to that of the late Lakers superstar Kobe Bryant.

"We have the Mamba mentality," Wood said.
"We are all dogs out there. Everybody wants to come out and play hard."

The 2018 NBA Most Valuable Player and an eight-time all-star, Harden, 31, had reportedly grown frustrated at Houston. Before moving to Brooklyn, he said the Rockets were "not even close" to the league's top competition.

Elsewhere on Thursday, Chris Boucher equalled his career-best with 25 points and 10 rebounds as the Toronto Raptors held off the Charlotte Hornets 111-108.

In Philadelphia, Shake Milton came off the bench to score a season-high 31 points, while Tobias Harris added 18 as the 76ers cruised past a depleted Miami Heat 125-108.

Malcolm Brogdon and Domantas Sabonis combined for 48 points as the Indiana Pacers secured a 111-87 away win at the Portland Trail Blazers.