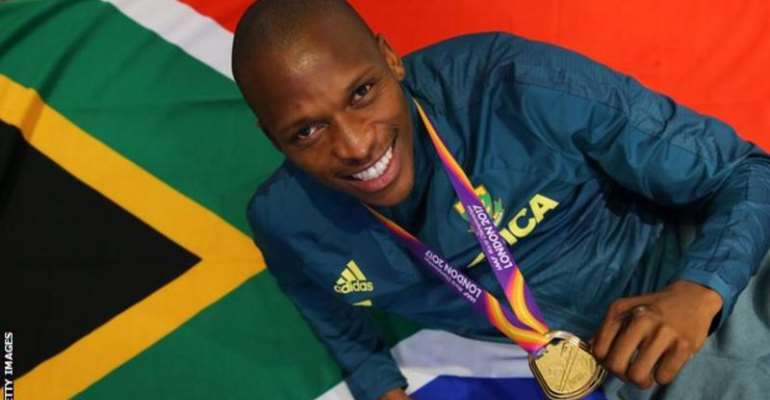 After claiming Olympic silver at Rio 2016, Luvo Manyonga won gold at the 2017 World Championships in London

The 30-year-old South African, who has battled drug addiction in the past, could be banned for two years for the whereabouts failures.

Manyonga is among the favourites to win gold in Tokyo after winning the 2017 World and 2018 Commonwealth titles.

In 2012, Manyonga was banned from athletics for 18 months after testing positive for crystal meth.

The Athletics Integrity Unit (AIU) says athletes must provide "accurate and up to date" details about their whereabouts as a way to "ensure compliance to anti-doping rules".

A whereabouts failure against an athlete will be recorded if they fail to submit their whereabouts by the required deadline, have not provided updated or sufficient details to administrators, or are not available for testing in an agreed 60-minute time slot.

Under World Athletics' anti-doping rules, any combination of three whereabouts failures within 12 months is a violation.

Manyonga was charged by the AIU on 23 December last year. If he accepts the ruling, the AIU could issue the maximum sanction of a two-year ban.

If he decides to appeal against the punishment, the case would be heard by an independent tribunal before a final decision is made.

In May 2020, Manyonga was fined for public drinking and contravening South Africa's strict lockdown restrictions.