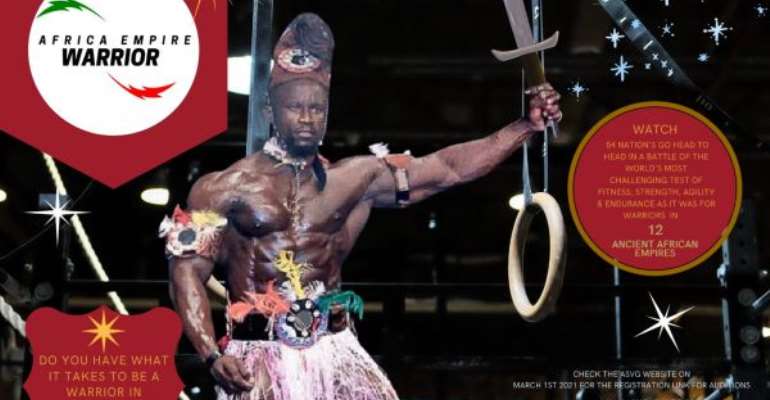 Africa Sports Ventures Group Officially Launched its Flagship Sports Entertainment show whose first season will be hosted in the Republic of Liberia in early 2022 called the Africa Empire Warrior show at a virtual Press Conference today along with officials from the Ministry of Culture of Liberia, its partners Canadian Digital Music Company HITLAB which will power the soundtrack of the show and Slovenian based Sky Scout; which will provide its AI Operated Cameras for the production.

The show's format, which is a test of strength, agility, power, endurance and ultimate fitness, will pit 4 contestants per African country in a series of obstacles against contestants from all 54 African Nations in the 12-stage competition. The 12-stage contest will have each stage represent 12 ancient African Empires and what it took for an individual to qualify to be a Warrior back in those times.

Some of the Empires to be featured are:
Benin Empire
Ghana Empire
Malian Empire
Songhai Empire
Carthaginian Empire

The rest of the empires will be revealed in due course as the preparation towards the production of the made for TV shows progresses.

According to the head of Production Ms. Tiah Knox of New Jersey USA; this is a show that will showcase the past glory of Africa and help people develop a new perspective of Africa and its rich history

Contestants will be vying for attractive Cash Prizes along with other goodies provided by our sponsors.

The show which a three months long annual series will be shown through local broadcast partners as well as on streaming platforms that will be revealed before Registration for Auditions starts on the Programs website on March 1st, 2021.

Fitness buffs, as well as athletes from any sports discipline or any individual from any walk of life who feels they have what it takes to compete for the Hefty Cash Prizes and other goodies, will have to register on the Africa Empire Warrior Website before being considered for Auditions and you can visit the website at www.africaempirewarrior.com

There will be auditions in every capital city of all Africa Nations giving every possible contestant out there a chance at that Grand prize.

Manual on COVID-19 vaccination being developed for public se...
44 minutes ago