How the power of sport changed the world in 2020 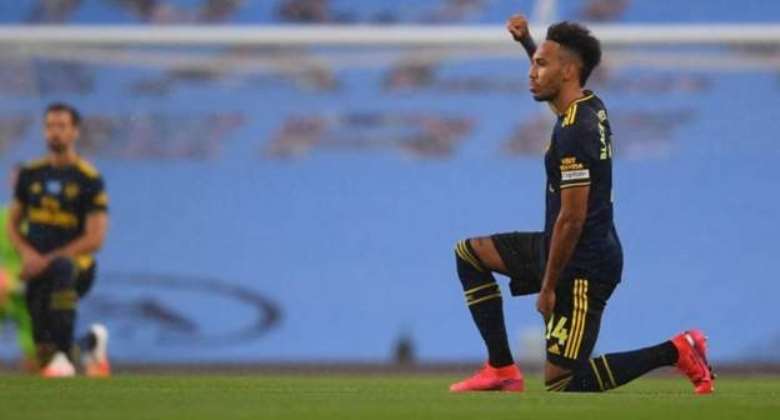 Back in 2000, former South Africa President Nelson Mandela declared that “sport has the power to change the world.” Two decades years later, 2020 proved how right he was.

This was a year where athletes of all different talents - footballers; basketballers; track and field stars; tennis players; F1 drivers - from across the world mobilised.

They protested against racism. And they demanded change.

Sierra Leone's US-based footballer, Kei Kamara - who joined in the protests following the death of George Floyd - told BBC Sport his children and their futures inspired him to make a stance.

"I lay down on the ground for nine minutes and my son actually then just lay down next to me, without me even asking him - and Kendrick is only three," Kamara said.

"He just decided to lay next to me. And I turned around and I saw him and it just hit me so hard, like 'wow'.

"I'm so, so grateful to every other race that's standing with us now because it's given us a voice".

2020 was also the year that footballers in the English Premier League began taking a knee before kick-off in show of unity against racism.

For the American triple-jump record holder Tori Franklin, sport has the capacity to provoke a shift in people’s mentality and play its part in the fight against racism.

“I feel like sport can really make a huge impact,” Franklin said.

“Sport is a big part of American culture. It’s gets a lot of TV time, a lot of press. Athletics teams taking a stand and protesting about something is going to make a huge impact.”

On 26 August 2020, the NBA team Milwaukee Bucks refused to play the fifth game of their playoff series against Orlando Magic following the shooting of African American Jacob Blake by a police officer near their home stadium.

This led the NBA not only to reschedule this match but also all the other games to be played that night.

And several other sports followed, supporting the athletes’ decisions to boycott a match: sports including baseball, football and tennis.

For Franklin, every sport has a voice and should speak out against racism - no matter its profile.

“Of course, we definitely have a voice," she said.

"Our voice is obviously not as big as the NBA, but there have been many athletes who have protested in competition - Gwen Berry in 2019 at the Pan-Americans games, Noah Lyles did it this year, at Monaco [Athletics Diamond League meeting], wearing a glove and putting up the black fist.

"And numerous athletes have been posting on their social media, going out on protesting, just being very involved - myself included."

The biggest platform for athletics is the Olympic Games - an event that, had coronavirus not happened, would have been the focal point of the sporting year.

And throughout history, athletes have used the Olympics to bring awareness to social and political issues, something the International Olympic Committee (IOC) does not allow.

In January 2020, with the Tokyo Olympics and Paralympics in sight, the IOC published fresh guidelines explaining the meaning of rule 50, a longstanding rule which states that “no kind of demonstration or political, religious or racial propaganda is permitted in any Olympic sites, venues or other areas.”

The IOC explicitly condemned “hand gestures or kneeling” and any “refusal to follow the Ceremonies protocol”.

This came following the incident at the 2019 Pan-American Games which Tori Franklin referred to, when American hammer throw-winner Gwen Berry raised her fist at the end of the medal ceremony and fencing winner Race Imboden knelt down during his medal ceremony to protest against racial inequality in the US.

Both were put on a probation for 12 months, and Berry said she lost sponsorship.

Such a stand comes with a serious cost for the athletes - not just financial but for their lives too.

The most iconic display of this remains Americans Tommie Smith and John Carlos who stood on the 200m podium shoeless with black socks, black gloves and fists raised at the 1968 Mexico Games. Both, with silver medallist Australian Peter Norman, were also wearing Olympic Project for Human Rights badges.

The Americans were suspended and banned from the Olympic village. All of them were ostracised when they went back to their countries and Australia only officially apologised years after Norman's death.

But today, the three men are celebrated as legends and heroes, even by the IOC itself.

At the 2016 Olympics in Rio, the marathon silver medallist Feyisa Lilesa surprised the world when he held up his crossed wrists above his head (as if they were shackled) while he crossed the finish line, a sign bringing awareness to the Oromo protests happening in Ethiopia at that time, against social and political marginalisation.

Ethiopia's Prime minister resigned two years later with the new leader implementing many reforms. If the change was not directly caused by Lilesa's stand, there is no doubt he forced the world to look at what was happening in his country at that time.

But the IOC's rule 50 is clear - such a demonstration is not allowed at the Olympics.

Tori Franklin says athletes are trying to find a common ground with the Olympic authorities.

“The athletes have created the Athletics Association which is run by a few track and field’s athletes. They’re doing their part as well, trying to urge the US Olympic committee to allow protests within competition without getting punishment for those athletes.”

In the documentary Jesse Owens Returns To Berlin, the legendary black American athlete - whose dominance at the 1936 Olympics, under Hitler's gaze, proved everything wrong with the Nazi's horrific ideology - says, “there is a bond among athletes of every race, religion and colour that transcends all prejudice.”

Sprinter Owens won four golds that Olympics. He knew all about the power of sport to break down racial barriers.

An example of it was his friendship with German long jump athlete Luz Long - the physical archetype of Hitler’s Aryan theory - at a time in history when everything in the world seemed to oppose them. But they maintained a shared humanity through sport and, perhaps, their faith.

Some 84 years later, athletes across sports united to make a stand against racism, It may have been sparked by events in the US, but the reaction was global.

Look at Burnley captain Ben Mee, seething with barely-contained anger in a live interview in response to a plane being flown over his club's ground with a White Lives Matter banner.

“What next?” was the question that followed the NBA Milwaukee Bucks' boycott on 26 August.

“But I do think that the things that we are doing are making an impact”.

It will require more than just sport to change the world for better.

But history has proved that sport has power; the power to unite people, inspire change, create hope and break down racial barriers.

Time for Ghana to leverage our digitization for digital manu...
20 minutes ago