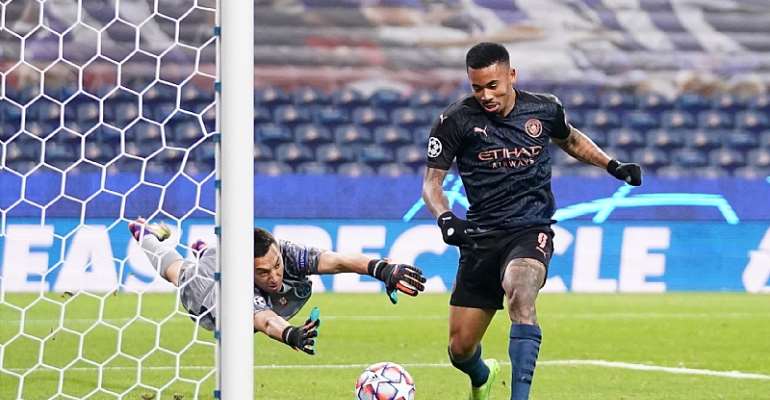 Gabriel Jesus of Manchester City scores a goal past Agustin Marchesin of Porto which is then disallowed for offside following a VAR review during the UEFA Champions League Group C stage match between FC Porto and Manchester City at Estadio do Dragao on De Image credit: Getty Images

Gabriel Jesus was denied a late winner by VAR as Manchester City’s 0-0 draw at Porto secured them top spot in their Champions League group.

With qualification for the knockout stages already secured for City ahead of kick-off, top spot in Group C was still up for grabs, the first half was a tight affair. Raheem Sterling came closest to scoring as his low shot was cleared off the line.

City improved after the break and had several chances to score, with Ruben Dias somehow contriving to miss from a yard out. City did think they had won it late on through substitute Jesus, but as the Brazilian celebrated, VAR adjudged Rodri to have been offside in the build-up and it was ruled out.

In the end, a point was enough to see unbeaten City sail through to the knockout stages with top spot secured, with one game to go.

Despite making seven changes from the side who hammered Burnley at the weekend, Pep Guardiola named a strong side in the Estadio do Dragao, with Phil Foden among the starters.

The England international was lively but could not help City break down the hosts, as the opening period became a familiar display from a City side this season - dominating the ball, but creating very little.

City found Porto stopper Agustín Marchesín in fine form in the second half, but after making another stunning save, Jesus was on hand to steer home the rebound from his own header to seemingly give City a fifth win from five group games.

However, Rodri's back foot was offside, with the help of those dreaded lines, and City were denied that 100 per cent record.