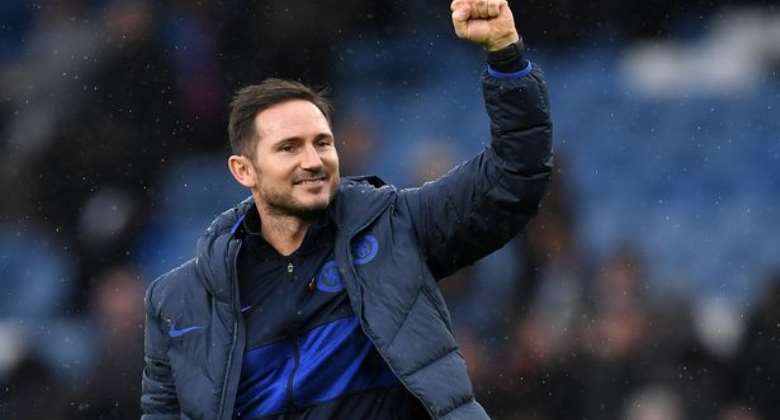 Chelsea are not a club known for giving their managers much time to get things right, but the progress Frank Lampard has made so far as Blues boss means he is not in a position where he has to ask for patience.

Yes, Sunday's draw with Tottenham meant Chelsea missed the chance to go top of the Premier League for the first time since Lampard took charge in June 2019 - and that would have been a very visible way of marking their development.

But even without finding a way through Jose Mourinho's side and therefore reaching the summit, their performance quietly underlined the improvements Lampard has made in 17 months in charge.

Frank Lampard's highest league position as Chelsea boss is second, where they were for one day - last Saturday, after beating Newcastle. However, excluding delays to last season due to the coronavirus pandemic, his side has spent 204 days out of a possible 298 in the top four

In his first season, their main issues were how they coped defensively, but they have looked far more solid for a few weeks now and it was the same again this time.

Everyone knows how dangerous Spurs are on the counter-attack, but Chelsea completely nullified the threat of Harry Kane and Son Heung-min. Those two did not get a sniff at Stamford Bridge.

I'm sure Frank will be a little disappointed his side did not take their chances, but the quality he has up front means scoring goals is not often going to be a problem for him.

When you look at the bigger picture, Chelsea are clearly still heading in the right direction - even if Lampard will have to wait a little while longer to hit top spot.

I spoke to Lampard last week and, quite rightly, he was delighted with the progress his side had made and where they were at, defensively and offensively.

Sunday's draw does not change that. Chelsea have now only lost once - to Liverpool - in 16 games in all competitions in 2020-21 and are already through to the last 16 of the Champions League.

They are third in the Premier League, only two points off the top, and are joint-highest scorers. Things are coming together nicely for them, and Lampard deserves a lot of credit for that.

He will tell you himself that he is a rookie manager and still learning about the job, but he has been very impressive in everything he has done so far.

Frank's achievements as a Chelsea player, his relationship with the fans and his friendship with the club's owner Roman Abramovich made him a good fit when he was appointed but without results to back that up he would still not have lasted very long.

He achieved his objectives last season under difficult circumstances - Chelsea had just sold their best player, Eden Hazard, and could not make any signings because of a transfer ban.

The Blues had to rely a lot on young players - one of the things that stood out for me was that Frank gave so many of them a chance - but they still finished in the top four and qualified for the Champions League.

At the beginning of this season, expectations were very different because they spent so big in the summer and there is probably more pressure on Lampard. So far, though, he has delivered.

There is still so much that Frank wants to achieve - and win - at Chelsea, but he has made a very strong start. He has not given anyone any reason to doubt him as manager - far from it, in fact.

Like Liverpool, Chelsea have scored 22 goals in 10 games this season. The Blues are on an eight-game unbeaten run in the Premier League and have never lost more than two successive league games under Lampard. Their worst winless run in the league since he took charge is four games (two draws and two defeats) in January and February this year

What has Lampard changed about Chelsea?
There was a time when Chelsea were leaking goals badly at the back but that is no longer the case. In all competitions, they have conceded only two goals in their past nine games.

Bringing in Edouard Mendy has made a big difference, because they now have a confident goalkeeper who has kept five clean sheets in six league games.

Thiago Silva also looks an excellent signing, bringing experience and nous to their back-line. He is 36 so he cannot play twice a week, but Lampard is using him wisely too, in order to manage his performances.

The depth to Chelsea's attacking options was illustrated when Lampard completely changed his front three in the second half against Spurs, with Christian Pulisic, Olivier Giroud and Kai Havertz replacing Timo Werner, Tammy Abraham and Hakim Ziyech

Then they have N'Golo Kane back doing what he does best - protecting the defence. Along with Mateo Kovacic, he did a great job of tracking Kane and Son and keeping them quiet on Sunday.

It means the Blues are harder to break down, but they have not lost their cutting edge in attack, where they have so many options to choose from.

They did not manage a goal against Tottenham but had by far the better opportunities even though Mourinho's side were reluctant to open up for the majority of the game.

At times, Spurs had Moussa Sissoko playing as a third centre-half and they were happy sitting deep in their own half.

There was not much space for Chelsea to exploit, but they still should have scored. Tammy Abraham had three good chances, Olivier Giroud was through late on and Mason Mount forced a brilliant save from Hugo Lloris.

A point against Spurs in the form they are in goes down as a good result of course but, knowing Frank, he will believe his side can get even better. His challenge now is to build on this excellent start.

Speeding motorbike runs over pedestrian at Nungua
49 minutes ago

A/R: One robber shot dead, two others arrested
57 minutes ago